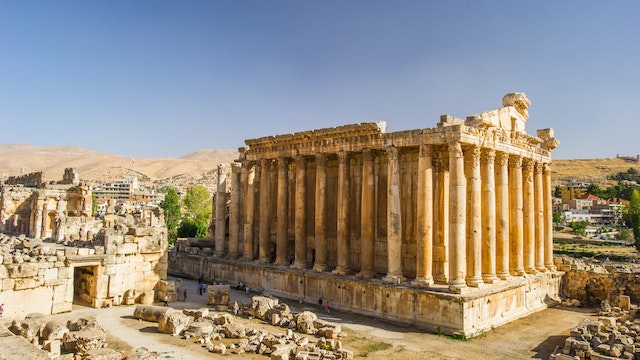 Baalbek's Temple of Bacchus is often described as the most beautifully decorated temple in the Roman world, and it's certainly one of the best preserved. The portico has eight columns along the facade and 15 along the sides, supporting a rich entablature and an exterior ceiling of curved stone that is decorated with vivid scenes: Mars, a winged Victory, Diana drawing an arrow, Tyche with a cornucopia, Vulcan with his hammer, Bacchus, and Ceres holding a sheaf of corn.

The temple was begun during the reign of Nero in the mid-1st century AD; its attribution to the god of wine – appropriate enough in the Bekaa – is uncertain but based on reliefs showing vines and other Bacchic themes. Examine the carvings around the doorways closely for their exquisite detail; a fallen section of the ceiling also allows you to examine this up close. For a tip, loitering guides can be good at pointing out elements that are otherwise easily missed, but take their fanciful interpretations of what is being depicted with a grain of salt. There's a small two-level museum in the medieval tower at the corner of the temple area, with Arab-era finds upstairs and sarcophagi downstairs, with good descriptions of Roman burial practices.