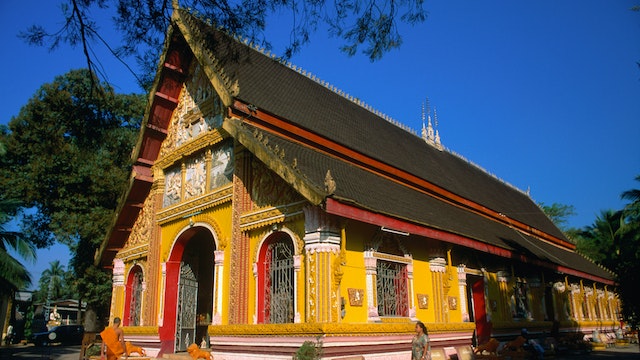 The most frequently used grounds in Vientiane are those of Wat Si Muang, the site of the lák méuang (city pillar), which is considered the home of the guardian spirit of Vientiane. The large sǐm (ordination hall; destroyed in 1828 and rebuilt in 1915) was constructed around the lák méuang, and consists of two halls.

The large entry hall features a copy of the Pha Kaeo (Emerald Buddha), and a much smaller, rather melted-looking seated stone Buddha that allegedly survived the 1828 inferno. Locals believe it has the power to grant wishes or answer troubling questions, and the practice is to lift it off the pillow three times while mentally phrasing a question or request. If your request is granted, then you are supposed to return later with an offering of bananas, green coconuts, flowers, incense and candles (usually two of each).

The pillar itself is located in the rear hall, and is believed to date from the Khmer period, indicating that the site has been used for religious purposes for more than 1000 years. Today it is wrapped in sacred cloth, and in front of it is a carved wooden stele with a seated Buddha in relief.

Behind the sǐm is a crumbling laterite jęhdii (stupa), almost certainly of Khmer origin. In front of the sǐm is a little public park with a statue of King Sisavang Vong (r 1904–59).