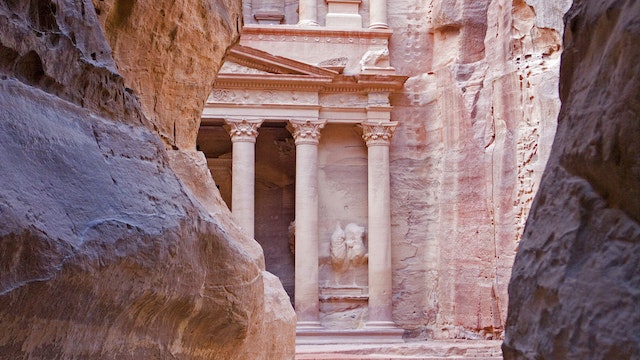 The 1.2km Siq, or canyon, with its narrow, vertical walls, is undeniably one of the highlights of Petra. The walk through this magical corridor, as it snakes its way towards the hidden city, is one full of anticipation for the wonders ahead – a point not wasted on the Nabataeans, who made the passage into a sacred way, punctuated with sites of spiritual significance.

The Siq starts at an obvious bridge, beside a modern dam. The dam was built in 1963, on top of a Nabataean dam dated AD 50, to stop floodwater from Wadi Musa flowing through the Siq. To the right, Wadi Muthlim heads through a Nabataean tunnel – the start (or finish) of an exciting hike. The entrance to the Siq was once marked by a Nabataean monumental arch. It survived until the end of the 19th century, and some remains can be seen at twin niches on either side of the entrance. Many people charge through the Siq impatient to get to Petra. That’s a pity because the corridor of stone is worth enjoying for its own sake and the longer you take to travel through it, the more you can savour the final moment of arrival.

Technically, the Siq, with its 200m-high walls, is not a canyon (a gorge carved out by water), but a single block that has been rent apart by tectonic forces. At various points you can see where the grain of the rock on one side matches the other – it’s easiest to spot when the Siq narrows to 2m wide. The original channels cut into the walls to bring water into Petra are visible, and in some places the 2000-year-old terracotta pipes are still in place. A section of Roman paving was revealed after excavations in 1997 removed 2m of soil accumulation.

Some historians speculate that the primary function of the Siq was akin to the ancient Graeco-Roman Sacred Way. Some of the most important rituals of Petra’s spiritual life began as a procession through the narrow canyon, and it also represented the end point for Nabataean pilgrims. Many of the wall niches that are still visible today along the Siq’s walls were designed to hold figures or representations (called baetyls) of the main Nabataean god, Dushara. These small sacred sites served as touchstones of the sacred for pilgrims and priests, offering them a link to the more ornate temples, tombs and sanctuaries in the city’s heart, reminding them that they were leaving the outside world, and on the threshold of what was for many a holy city.

At one point the Siq opens out to reveal a square tomb next to a lone fig tree. A little further on, look for a weathered carving of a camel and caravan man on the left wall. The water channel passes behind the carving. Hereafter, the walls almost appear to meet overhead, shutting out the sound and light and helping to build the anticipation of a first glimpse of the Treasury. It’s a sublime introduction to the Ancient City.