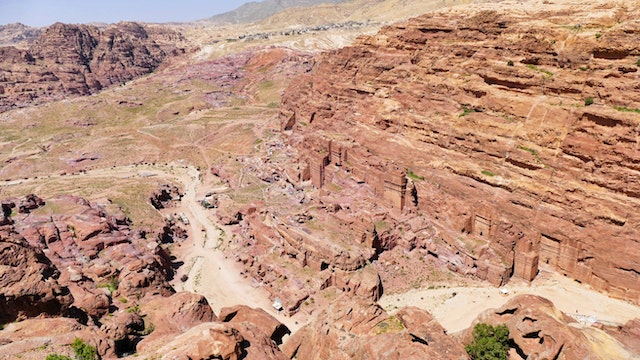 The most accessible of Petra’s High Places, this well-preserved site was built atop Jebel Madbah with drains to channel the blood of sacrificial animals. A flight of steps signposted just before the Theatre leads to the site: turn right at the obelisks to reach the sacrificial platform. You can ascend by donkey (about JD10 one way), but you’ll sacrifice both the sense of achievement on reaching the summit and the good humour of your poor old transport.

The obelisks are more than 6m high; they are remarkable structures because they are carved out of the rock face, not built upon it: looking at the negative space surrounding them, you can understand the truly epic scale of excavation involved. Dedicated to the Nabataean gods Dushara and Al ‘Uzza, their iron-rich stone glows in the sun and they act like totems of this once-hallowed ground.

The altar area includes a large rectangular triclinium, where celebrants at the sacrifice shared a communal supper. In the middle of the High Place, there’s a large stone block preceded by three steps. This is a motab (repository), where the god statues involved in the procession would have been kept. Next to it is the circular altar, reached by another three steps; stone water basins nearby were used for cleansing and purifying.

The faint bleat of sheep or the clunk of a goat bell evokes the ancient scene – except that no ordinary person would have been permitted to enter this holy of holies at that time. Cast an eye across the superb panorama in front of you – far above the mortal goings-on of both ancient and modern city – and it’s easy to see how this site must have seemed closer to the sky than the earth.

The steps to the High Place of Sacrifice are well maintained, if unremitting, and it takes about 45 minutes up through the crevices and folds of the mountain to reach the obelisks from the Theatre. From here you fork right to reach the altar area. The route is steep but not unduly exposed, so is manageable (unless you suffer from severe vertigo) even without a head for heights. From the altar area, descend the shelves of rock to a broad rim: about 50m down are regal views of the Royal Tombs.

It’s worth sitting here for a while. From this lofty vantage point you can watch the everyday dramas of camel handlers arguing with their mounts, young children moving goats from one patch of sparse vegetation to the next and Bedouin stallholders regaling the unsuspecting traveller. They each move beyond the languishing tombs of ordinary folk, far too mindful of the needs of the living to worry much about the forgotten hopes of the ancient dead.

From the obelisks it's possible to continue to the city centre via a group of interesting tombs in beautiful Wadi Farasa.