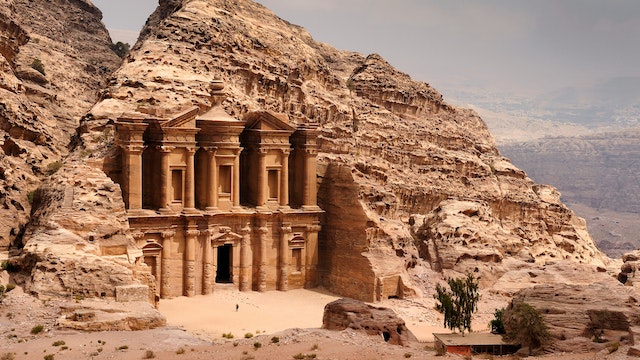 Hidden high in the hills, the Monastery is one of the legendary monuments of Petra. Similar in design to the Treasury but far bigger (50m wide and 45m high), it was built in the 3rd century BCE as a Nabataean tomb. It derives its name from the crosses carved on the inside walls, suggestive of its use as a church in Byzantine times. The ancient rock-cut path of more than 800 steps starts from the Basin Restaurant and follows the old processional route.

The cave tea shop opposite is a good vantage point for admiring the Monastery’s Hellenistic facade – particularly spectacular bathed in mid-afternoon sunlight. The courtyard in front of the Monastery was once surrounded by columns and was used for sacred ceremonies.

Behind the tea shop, tomb 468 is worth exploring for another fine facade, some defaced carvings and excellent views. A trail leads up to stunning viewpoints over Wadi Araba, Israel and the Palestinian Territories and south to the peak of Jebel Haroun, topped by a small white shrine.

The easy-to-follow trail from the Basin Restaurant to the Monastery takes about 40 minutes (if in doubt as to the trailhead, look for weary hikers coming down). Alternatively, donkeys (with a guide) can be hired for about JD20 return depending on your negotiation skills; you’re better off walking coming down as the donkeys travel fast and the way is steep and slippery, making for an uncomfortable and at times dangerous journey for both you and your mount. The trip is best started in mid-afternoon when there is welcome shade and the Monastery is at its most photogenic. The path follows the old processional route and is a spectacle in its own right, with flights of eroded steps scooped out of the weird and wonderfully tortured stone. There are several side paths to explore, including a detour to the Lion Tomb, set in a gully. The two weather-beaten lions that lend the tomb its name face each other at the base of the monument.

An exciting 6km hike leads from the Monastery to Siq Al Barid (Little Petra; it takes about 2½ hours and involves a newly paved path and steps). Ask at Petra Visitor Centre or at local travel agencies for a guide as the route is difficult to find.