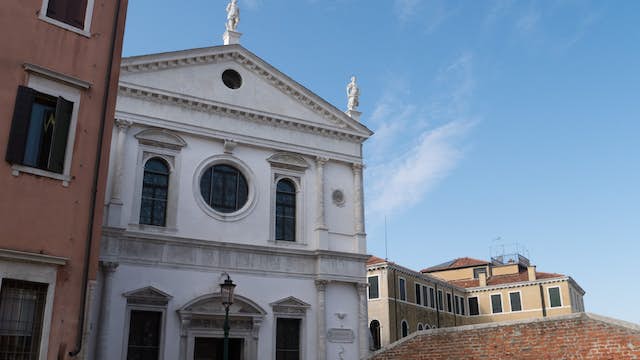 Antonio Scarpignano’s relatively austere 1508–48 facade creates a sense of false modesty at this neighbourhood church. The interior is adorned with floor-to-ceiling masterpieces by Paolo Veronese, executed over three decades. According to popular local legend, Veronese found sanctuary at San Sebastiano in 1555 after fleeing murder charges in Verona, and his works in this church deliver lavish thanks to the parish and an especially brilliant poke in the eye to his accusers.

Veronese chose to be buried here, underneath his masterpieces – his memorial bust is to the right of the organ. The artist's virtuosity is displayed all around, from the horses rearing on the coffered ceiling to the organ doors covered with his Presentation in the Temple. In the Martyrdom of Saint Sebastian near the altar, the bound saint defiantly stares down his tormentors amid a Venetian crowd of socialites, turbaned traders and Veronese’s signature frisky spaniel. St Sebastian was a fearless patron of Venice's plague victims, and Veronese suggests that, although sticks and stones may break his bones, Venetian gossip couldn't kill him. Peek into the sacristy to glimpse Veronese's glowing Coronation of the Virgin (1555) on the ceiling.

However, there's more than one master at work here; don’t miss Titian’s St Nicholas (1563) to the right of the entry.