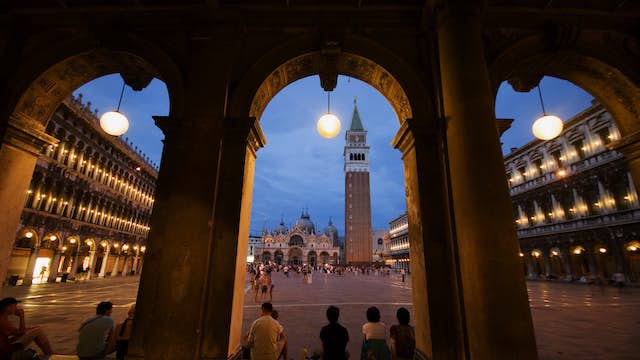 Basilica di San Marco's 99m-tall bell tower has been rebuilt twice since its initial construction in AD 888. Galileo Galilei tested his telescope here in 1609 but modern-day visitors head to the top for 360-degree lagoon views and close encounters with the Marangona, the booming bronze bell that originally signalled the start and end of the working day for the marangoni (artisans) at the Arsenale shipyards. Today it rings twice a day, at noon and midnight.

The tower's distinctive profile was the brainchild of Bartolomeo Bon, whose 16th-century design was initially criticised for being ungainly. However, when the tower suddenly collapsed in 1902, the Venetians painstakingly rebuilt it exactly as it was, brick by brick. Sansovino's classical marble loggia at the base of the campanile is decidedly mythical, showcasing bronzes of pagan deities Minerva, Apollo and Mercury, as well as Peace.

The campanile attracts long queues in high season due to the limited capacity of the small lift that whisks you up to the top. Between April and October for a surcharge of €5 you can book 'Skip the Line' access via the basilica's website. There are only 12 places available for each hourly time slot, so book well in advance.