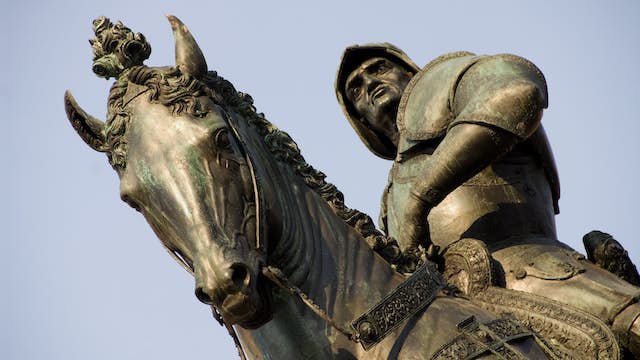 Bartolomeo Colleoni's galloping bronze equestrian statue is one of only two such public monuments in Venice – and an extraordinary example of early Renaissance sculpture. It commemorates one of Venice’s most loyal mercenary commanders. From 1448 Colleoni commanded armies for the Republic, though in true mercenary form he switched sides a couple of times when he felt he’d been stiffed on pay or promotions.

On his death in 1474, Colleoni bequeathed 216,000 gold and silver ducats to Venice, on one condition: that the city erect a commemorative statue to him in Piazza San Marco. Since not even a doge had ever won such pride of place in Venice, the Senate found a workaround, placing the monument in front of the Scuola Grande di San Marco instead. Sculpted by Florentine master Andrea del Verrocchio (1435–88), it is embellished with Colleoni’s emblematic coglioni (cullions or testicles) – a typically crude Renaissance pun. You can spot them on the base, looking like emphatic quotation marks.