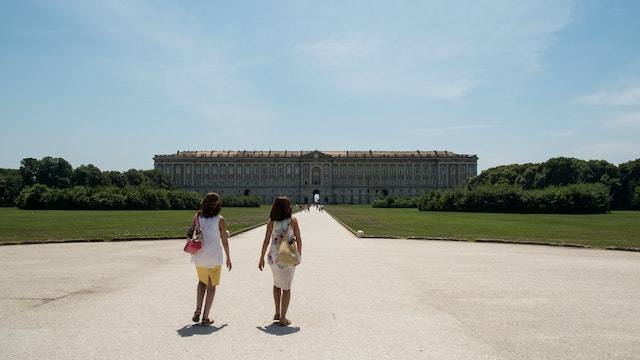 Italy's swansong to the baroque, the colossal Reggia di Caserta began life in 1752 after Charles VII ordered a palace to rival Versailles. Not one to disappoint, Neapolitan architect Luigi Vanvitelli delivered a palace bigger than its French rival. With its 1200 rooms, 1790 windows, 34 staircases and 250m-long facade, it was reputedly the largest building in 18th-century Europe.

The back rooms off the Sala di Astrea (Room of Astraea) house an extraordinary collection of historic wooden models of the Reggia, along with architectural drawings and early sketches of the building by Luigi Vanvitelli and his son, Carlo. The apartments are also home to the Mostra Terrea Motus, an underrated collection of international modern art commissioned after the region's devastating earthquake in 1980. Among the contributors are US heavyweights Cy Twombly, Robert Mapplethorpe and Keith Haring, as well as local luminaries like Mimmo Paladino and Jannis Kounellis.

The complex has appeared in numerous films, including Mission: Impossible III, Star Wars: Episode 1 – The Phantom Menace, and Star Wars: Episode II – Attack of the Clones, moonlighting as Queen Amidala's palace in the latter two.

To clear your head afterwards, explore the elegant landscaped park, which stretches for some 3km to a waterfall and a fountain of Diana. Within the park is the famous Giardino Inglese (English Garden), a romantic oasis of intricate pathways, exotic flora, pools and cascades. Bicycle hire (from €4) is available at the back of the palace building, as are pony-and-trap rides (€50 for 40 minutes, up to five people).

If you're feeling peckish, consider skipping the touristy palace cafeteria for local cafe Martucci, located 250m east of the complex.

Regular trains connect Naples to Caserta (€3.40, 30 to 50 minutes); always plan ahead and check times online before hitting the station. Caserta train station is located directly opposite the palace grounds. If you're driving from Naples, exit the A1 (E45) at Caserta Sud and follow signs for Caserta and the Reggia.