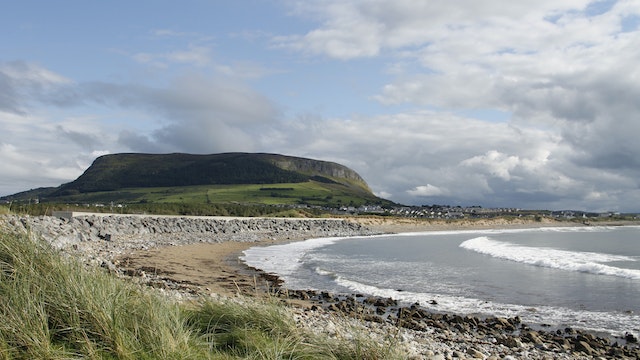 Sligo's ultimate rock pile sits atop a magical mountain hike. Knocknarea Cairn is popularly believed to be the grave of legendary Queen Maeve (Queen Mab in Welsh and English folk tales). The 40,000 tonnes of stone have never been excavated, despite speculation that a tomb on the scale of the one at Newgrange lies buried below.

The site is 2km northwest of Carrowmore. The parking area is off the R292.

The cairn is perched high atop a limestone plateau (328m); a 40-minute (1.2km; the fit and fast can do it in 20 minutes) trek up the mountain reveals spectacular views. From the top you can gaze out over Benbulben, Rosses Point and the Atlantic Ocean beyond. The cairn seems to be looking over your shoulder everywhere you dare tread in its ancestral backyard. Many think the rocks purposely form a giant nipple, which takes on meaning when the overall horizon is viewed from Carrowmore. Believers in underlying powers at the sites say that you can easily make out the shape of a reclining woman, or a mother god. They say that Queen Maeve is buried upright in the cairn, holding a spear and facing her adversaries in Ulster.

WB Yeats was enthralled by the myth and lore of Knocknarea and its magic wormed its way into his verse. In Red Hanrahan’s Song about Ireland, he writes: 'The wind has bundled up the clouds high over Knocknarea, And thrown the thunder on the stones for all that Maeve can say.'

Having got to the mountain top, signs urge you not to climb the cairn itself. An estimated 100,000 walkers visit the wider site each year, and an increase in the numbers of people clambering up over the stacked stones is causing erosion to this historic structure.