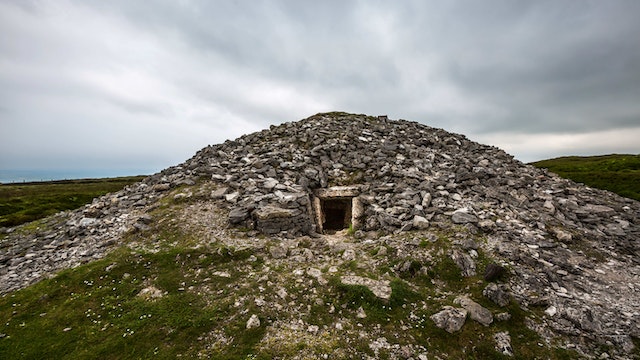 With a bird's-eye view of the county from high in the Bricklieve Mountains, it's little wonder this hilltop site was sacred in prehistoric times. But for a few sheep, it's undeveloped and spectacular. Dotted with 14 passage cairns, the site dates from the late Stone Age (3000 to 2400 BC).

Carrowkeel is closer to Boyle than Sligo town. It's about 5km from either the R295 in the west or the N4 in the east. Follow the signs.

This windswept and lonely location is simultaneously eerie and uplifting. Just the sweeping views down to South Sligo county from the car park make the journey worthwhile; the views further on over Lough Arrow are just as stunning. It's a 2km walk from the car park (look out for the sign that says 'Pedestrians Only') to the first ancient site, Cairn G. Above its entrance is a roof-box aligned with the midsummer sunset, which illuminates the inner chamber. The only other such roof-box known in Ireland is that at Newgrange in County Meath. Continue along to another three such cairns (the last one in a state of collapse) and you'll reach a fence with a piece of plastic tubing over the wire. Cross this and after a short distance you will find a huge limestone sinkhole full of small trees, shrubs and vegetation.

Everywhere you look across the surrounding hills in this region there's evidence of early life, including about 140 stone circles – all that remain of the foundations of a large village thought to have been inhabited by the builders of the tombs.