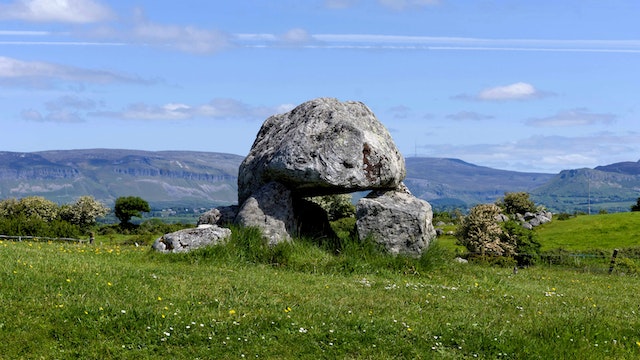 One of the largest Stone Age cemeteries in Europe, Carrowmore is finally receiving the renown it deserves and is Sligo's must-see attraction. Some 30 monuments, including passage tombs, stone circles and dolmens, adorn the rolling hills of this haunting site, which is thought to predate Newgrange in County Meath by 700 years.

Ongoing excavations continue to uncover more areas of interest both within the public site and on adjoining private land.

Discoveries about the meaning of Carrowmore are both continuing and dramatic, particularly in terms of how the many features of the site relate to the surrounding hills and mountain. Among the numbered sites, 51 has been found to get direct sunlight at dawn each 31 October, or Halloween. Many people claim to feel strong powers here and you'll likely see a few spiritual pilgrims on the site.

The site is some 2.5km-wide. In it dolmens appear delicately balanced, and many monuments have been altered over the centuries. Look out for the prominent Circle Seven, which has been partly reconstructed and so gives a strong impression of how it would have looked 6000 years ago.

The visitor centre has full details and staff are happy to explain much more, plus detail the latest discoveries.