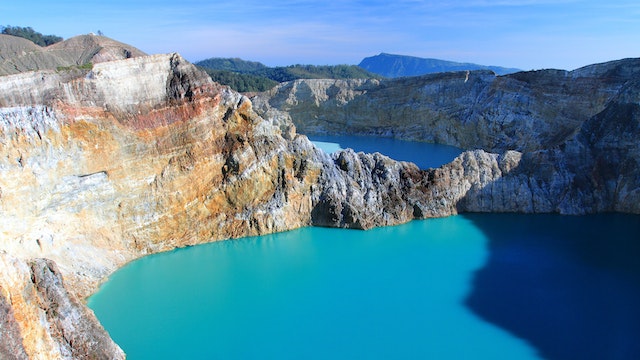 Kelimutu National Park is a Nusa Tenggara must. Its centrepiece is Gunung Kelimutu, crowned by three startling lakes that shift colour thanks to dissolving minerals. Try to swallow your outrage at locals paying only 10,000Rp entry and lap up the ethereal beauty instead. Alert local guides if you dream about the sacred lakes – apparently siren-like spirits have lured people to their demise, which can be avoided if the right prayers and offerings are made.

Kelimutu is sacred to the local Lio people, who believe the souls of the dead migrate here: young people’s souls go to the warmth of Tiwu Koo Fai Nuwa Muri; old people’s to the cold of Tiwu Ata Bupu; and those of the wicked to Tiwu Ata Polo. Pork, betel nuts, rice and other valuable offerings are left on ceremonial rocks beside the lakes, amid the dancing of the Lio's annual 'Feed the Spirit of the Forefathers' ceremony, on August 14.

Ever since locals led early Dutch settlers here, sightseers have made the sunrise trek. Most visitors glimpse the lakes at dawn, leaving nearby Moni at 4am for early morning views after the pre-dawn mist rises, and before clouds drift in. Afternoons are usually empty and peaceful at the top of Mt Kelimutu, and when the sun is high, the colours sparkle.

There’s a staircase up to the highest lookout, Inspiration Point, from where all three lakes are visible. It’s not advisable to scramble around the craters' loose scree. The footing’s so bad and the drop so steep, a few careless hikers have perished here.

It's worth staying in Moni rather than attempting Kelimutu as a day trip, should bad weather obscure the view or close the road to the top. Remain flexible with onward travel plans, especially during wetter months.