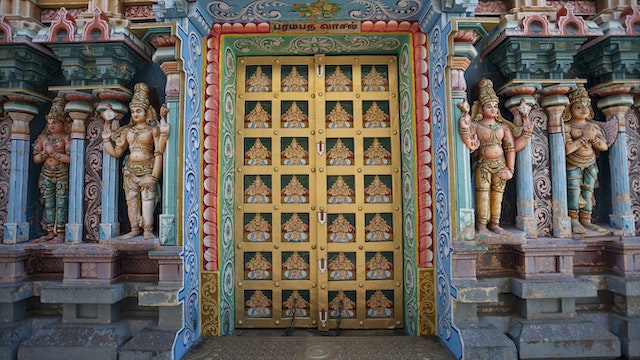 So large it feels like a self-enclosed city, Sri Ranganathaswamy is quite possibly India's biggest temple. It has 49 separate Vishnu shrines, and reaching the inner sanctum from the south, as most worshippers do, requires passing through seven gopurams. The first (southernmost), the Rajagopuram, was added in 1987, and is one of Asia's tallest temple towers at 73m high. Non-Hindus cannot pass the sixth gopuram so won't see the innermost sanctum, where Vishnu as Ranganatha reclines on a five-headed snake.

You pass through streets with shops, restaurants, motorbikes and cars until you reach the temple proper at the fourth gopuram. Inside on the left is an information counter selling tickets for the roof viewpoint (₹20), which affords semipanoramic views. Take no notice of would-be guides who spin stories to get hired. Also here, in the southwest corner, is the beautiful 16th-century Venugopal Shrine, adorned with superbly detailed Nayak-era carvings of preening gopis (milkmaids) and the flute-playing Krishna (Vishnu's eighth incarnation).

Inside the fifth gopuram is the Garuda Mandapa, containing an enormous shrine to Vishnu's man-eagle assistant, posed in semiseated position to show that he's ever-ready to leap up and go to Vishnu the moment he is called to fly the god somewhere. Note, too, four remarkable sculptures of Nayak donors (with daggers on the hip).