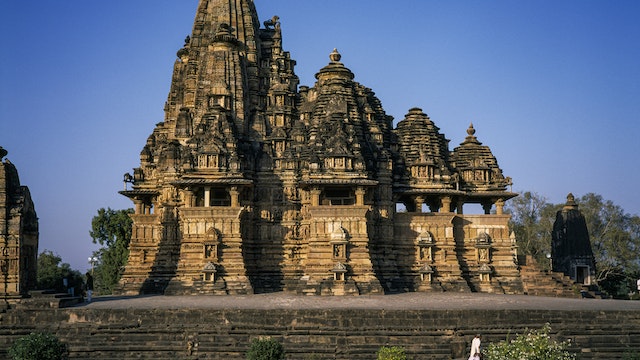 Believed to have been built in 1002, the Vishvanath Temple anticipates the plan and style of the Kandariya-Mahadev Temple. Dedicated to Shiva, it's a superlative example of Chandela architecture, with a riot of carved figures continuing up to the highest levels of the sikharas. Sculptures include a female doing a headstand in the north-side recess; sensuous surasundaris writing letters, cuddling babies, looking in mirrors and scratching their backs; and miniature camels, horses, musicians, elephants, warriors and dancers in the lowest frieze.

At the east end of the platform, a 2.2m-long statue of Nandi, Shiva’s bull vehicle, faces the temple. The basement of this 12-pillared shrine is decorated with an elephant frieze that recalls similar work on the Lakshmana Temple’s facade.