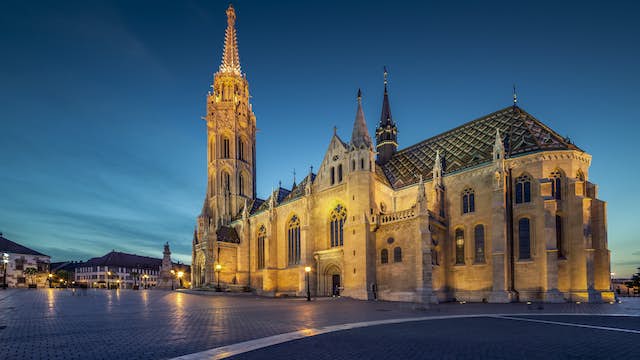 Parts of Matthias Church date back 500 years, notably the carvings above the southern entrance, but essentially the church (named after King Matthias Corvinus who married Queen Beatrix here in 1474) is a neo-Gothic confection designed by the architect Frigyes Schulek in 1896.

Steps in the northwest corner of the church lead up to the Royal Oratory and the Matthias Church Collection of Ecclesiastical Art (Mátyás-templom Egyházművészeti Gyűteménye), included in the church admission fee, which contains ornate monstrances, reliquaries and chalices, plus replicas of the Crown of St Stephen and other items of the coronation regalia including the coronation throne. Ascending the 200-odd steps of the steeple will bring you to the top of the Panoramic Tower (Torony Panoráma, adult/concession 1500/1000Ft) with stunning views of the city.

Organ concerts take place in the church on certain evenings (usually Friday and Sunday at 7pm or 7.30pm), continuing a tradition dating from 1867 when Franz Liszt’s Hungarian Coronation Mass was first played here for the coronation of Franz Joseph and Elizabeth, the beloved queen affectionately known as 'Sissi'. The current 7000-pipe organ was built in 1909.