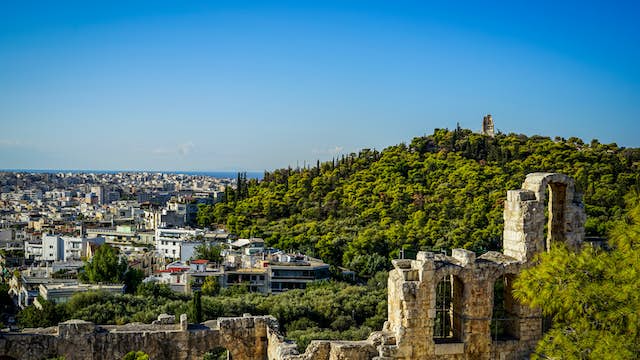 Also called the Hill of the Muses, Filopappou Hill – along with the hills of the Pnyx and the Nymphs – is a somewhat wild, pine-shaded spot that's good for a stroll, especially at sunset. The hill also gives some of the best vantage points for photographing the Acropolis, and views to the Saronic Gulf.

The hill is identifiable by the Monument of Filopappos crowning its summit; it was built between AD 114 and 116 in honour of Julius Antiochus Filopappos, a prominent Roman consul and administrator. The marble-paved path, laid out in the 1950s by modernist architect Dimitris Pikionis, starts near the periptero (kiosk) on Dionysiou Areopagitou. After 250m, it passes the excellent Church of Agios Dimitrios Loumbardiaris, which contains fine frescoes. There's a detour to Socrates' prison, and the main path leads to the Shrine of the Muses, cut into the rock face just below the top of the hill.

Inhabited from prehistoric times to the post-Byzantine era, the area was, according to Plutarch, the area where Theseus and the Amazons did battle. In the 4th and 5th centuries BC, defensive fortifications – such as the Themistoclean wall and the Diateichisma – extended over the hill, and some of their remains are still visible.