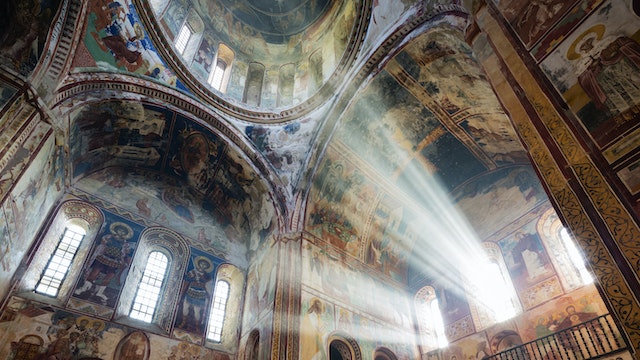 This Unesco World Heritage–listed monastery complex, on a wooded hillside 8km northeast of Kutaisi, is an outstanding example of Golden Age architecture and one of Georgia's most important churches. Gelati was a cultural hub of Georgia's medieval renaissance, and many Georgian rulers were buried here, including the great 12th-century king, David the Builder. The interior of the main Cathedral of the Virgin is among the brightest and most colourful in Georgia, with fascinating frescoes.

King David founded Gelati in 1106 as a centre for Christian culture and Neoplatonist learning. Medieval chroniclers described its academy as a ‘second Jerusalem’ and a 'new Athens'. In 1510 the Ottoman Turks set fire to the complex, but Bagrat III of Imereti subsequently restored it. The monks were cast out by the communists in 1922, but the churches were reconsecrated in 1988.

The first building you come to as you enter the complex is the Church of St George, which contains multiple colourful frescoes. Outside the cathedral’s west door is the smaller Church of St Nicholas, built on an unusual arcaded base, and beyond that, the recently rebuilt Academy, where philosophy, theology, sciences and painting were studied, and important chronicles and translations written. David the Builder’s grave lies inside the south gate: David wanted all who entered the monastery to step on his tomb, a notably humble gesture for such a powerful man. Ironically, reverent visitors today take great care not to step on it.

The frescoes in the main Cathedral of the Virgin were painted between the 12th and 18th centuries: the line of six noble figures on the wall to your left as you face the altar includes David the Builder (holding the church) and Bagrat III of Georgia (with a cross over his left shoulder). A famous 1120s mosaic of the Virgin and Child, with Archangels Michael and Gabriel to the left and right respectively, looks down from the apse ceiling. If you visit during the Sunday-morning service from around 10am, you’ll be treated to beautiful Georgian chants.

Marshrutky to Gelati (1 GEL, 30 minutes) leave from outside the Dinmart Supermarket behind the Drama Theatre in Kutaisi hourly from 8am to 6pm, passing the Motsameta turn-off en route. The last one back from Gelati is at 4.30pm. If you’re visiting both places, it’s a mostly downhill road-walk of about one hour from Gelati to Motsameta, should the return marshrutka schedules not suit: you can cut 800m off the distance by heading to the left along the railway after 3.5km.

A taxi round-trip from Kutaisi to Gelati typically costs 25 GEL, or 30 GEL with Motsameta too.