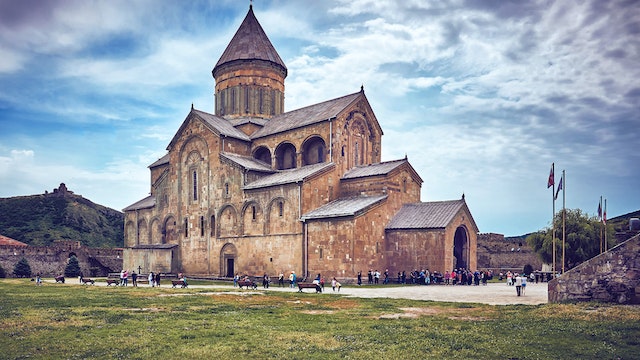 This extraordinary (and for its time, enormous) building dates from the 11th century, early in the golden age of Georgian church architecture. It has an elongated cross plan and is adorned with beautiful stone carving outside and in. Christ’s robe is believed to lie beneath the central nave, under a square pillar decorated with colourful if faded frescoes of the conversion of Kartli.

The story goes that a Mtskheta Jew, Elioz, was in Jerusalem at the time of Jesus' crucifixion and returned with the robe to Mtskheta. His sister Sidonia took it from him and immediately died in a passion of faith. The robe was buried with her and as years passed, people forgot the exact site. When King Mirian built the first church at Mtskheta in the 4th century, the wooden column designed to stand in its centre could not be raised from the ground. But after an all-night prayer vigil by St Nino, the column miraculously moved of its own accord to the robe's burial site. The column subsequently worked many miracles and Svetitskhoveli means ‘Life-Giving Column’.

In the 5th century Vakhtang Gorgasali replaced Mirian’s church with a stone one, and the present building was constructed between 1010 and 1029 under Patriarch Melqisedek. Now a millennium old, it's still one of the most beautiful churches in the country.

Several Georgian monarchs are buried here. The tomb of Erekle II, king of Kartli and Kakheti from 1762 to 1798, lies before the icon screen (marked with his birth and death dates, 1720 and 1798). Vakhtang Gorgasali’s tomb is behind this, with his sword-holding image carved on a raised flagstone.