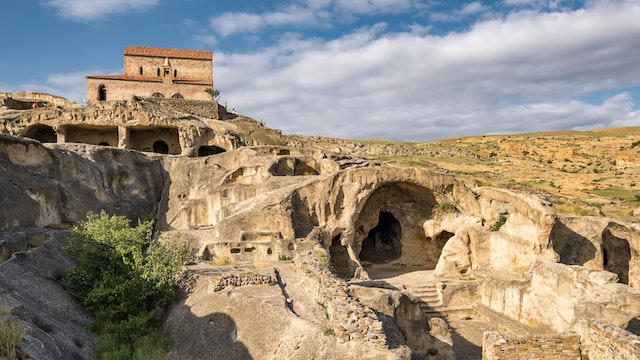 This once enormous cave city sits 10km east of Gori above the north side of the Mtkvari River. Between the 6th century BC and 1st century AD, Uplistsikhe developed into one of the chief political and religious centres of pre-Christian Kartli, with temples dedicated principally to the sun goddess. After the Arabs occupied Tbilisi in AD 645, Uplistsikhe became the residence of the Christian kings of Kartli and an important trade centre on a main caravan road from Asia to Europe.

At its peak it housed 20,000 people. Its importance declined after King David the Builder retook Tbilisi in 1122 and it was irrevocably destroyed by the Mongols in 1240. What you visit today is the 40,000-sq-metre Shida Qalaqi (Inner City), less than half of the original whole. It's one of the oldest places of settlement in the Caucasus and almost everything here has been uncovered by archaeologists since 1957.

To enter Uplistsikhe by its old main access track, go about 5m up the rocks opposite the cafe at the entrance, and follow the rock-cut path to the left. Metal-railed steps lead up through what was the main gate, with the excavated main tower of the Shida Qalaqi’s defensive walls to the right. Uplistsikhe's old main street winds up to the right after you've passed through the main gate, with several important cave structures either side of it.

Ahead from the main gate you’ll find a cave overlooking the river with a pointed arch carved in the rock above it. Known as the Theatre, this is probably a temple from the 1st or 2nd century AD, where religious mystery plays may have been performed.

Down to the right is the large pre-Christian Temple of Makvliani, with an inner recess behind an arched portico. A little further up on the left is the big hall known as Tamaris Darbazi (Hall of Queen Tamar), where an ancient stone seat sits behind two columns cut from the rock, and the stone ceiling is carved to look like wooden beams. This was almost certainly a pre-Christian temple. To its left is an area with stone niches, thought to have been a pharmacy or dovecote.

A large cave building to the right of the Tamaris Darbazi was probably a sun temple used for animal sacrifices, later converted into a Christian basilica.

Uplistsulis Eklesia, the triple-church basilica near the top of the hill, was built in the 10th century over what was probably Uplistsikhe’s most important pagan temple.

On your way back out of the cave city, don’t miss the long tunnel running down to the Mtkvari, an emergency escape route that could also be used for carrying water up to the city. Its entrance is behind a reconstructed wall beside the old main gate.

A return taxi from Gori, including one hour's waiting time, normally costs around 30 GEL. Marshrutky leave Gori bus station a few times daily for the village of Kvakhvreli (1 GEL, 20 minutes), a 2km walk from Uplistsikhe, while a new direct service to Uplistsikhe is planned but was not yet operational at the time of research.