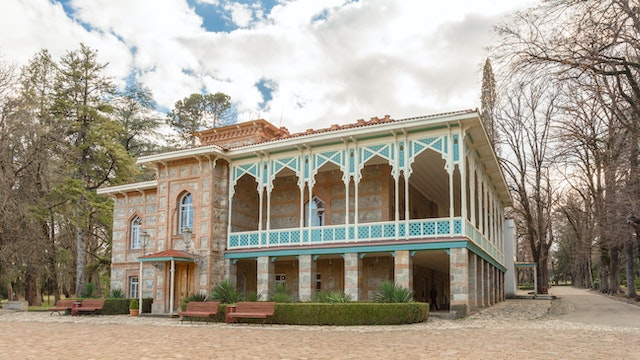 Prince Alexander Chavchavadze (1786–1846) was one of the most colourful and influential characters in Georgian history, and the palace and gardens he created at Tsinandali are a don't-miss stop on any Kakheti tour. The palace tour takes you around half a dozen rooms restored in 19th-century style and relates interesting episodes from the family story. The park is beautifully laid out in the English style, with venerable trees and exotic plants such as ginkgo, sequoia and yucca.

The multi-talented Chavchavadze was born into elite circles in St Petersburg as the son of Kakheti-Kartli's ambassador to Russia. He learned seven languages and was an influential Romantic poet and translator, helping to introduce European Enlightenment ideals to Georgia – as well as the grand piano, horse-drawn carriage and billiards. He rose to lieutenant-general in the Russian army but also joined Georgian rebellions against Russian rule (for which he spent time in exile). His homes at Tsinandali and in Tbilisi hosted illustrious visitors including writers Dumas, Pushkin, Lermontov and Griboyedov – and he was a pioneer of European winemaking techniques in Georgia, helping to give Kakheti its current premier position in the Georgian wine world.

In 1854 Lezgin tribesmen from Dagestan ransacked the Chavchavadze palace, kidnapping 23 women and children (what we see now is the house that was rebuilt after the Lezgin attack). Alexander’s son David had to mortgage the house to ransom the hostages. He was unable to repay the loan and the house passed to Tsar Alexander III.