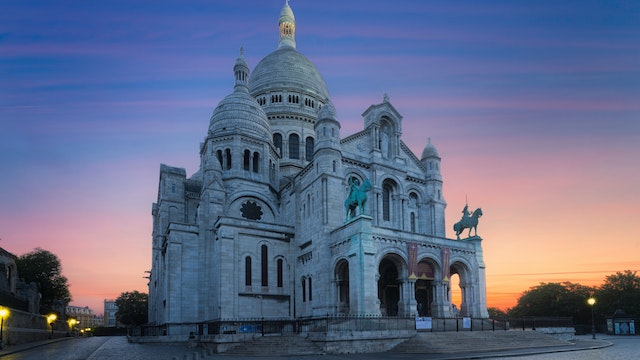 Begun in 1875 in the wake of the Franco-Prussian War and the chaos of the Paris Commune, Sacré-Cœur is a symbol of the former struggle between the conservative Catholic old guard and the secular, republican radicals. It was finally consecrated in 1919, standing in contrast to the bohemian lifestyle that surrounded it. The view over Paris from its parvis is breathtaking. Avoid walking up the steep hill by using a regular metro ticket aboard the funicular to the upper station.

Some 300 spiralling steps lead you to the basilica’s dome, which affords one of Paris’ most spectacular panoramas – it's said you can see up to 30km on a clear day. Weighing in at 19 tonnes, the bell called La Savoyarde in the tower above is the largest in France. The chapel-lined crypt is closed indefinitely to the public.

On Sundays, you can catch the organ being played during Mass and Vespers.

Visiting Sacré-Cœur is a veritable experience, from the musicians performing on the steps to the groups picnickers on the hillside park. Watch out for touts and pickpockets, however, who often work the crowds.