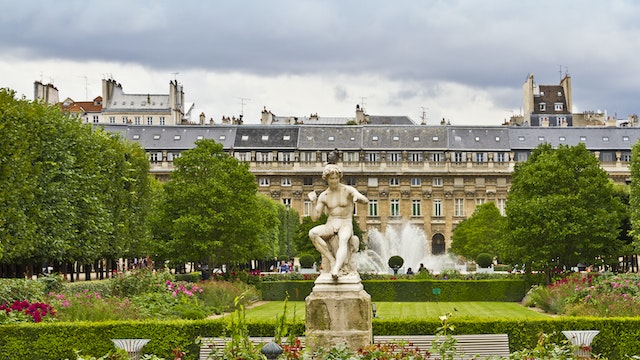 The Jardin du Palais Royal is a perfect spot to sit, contemplate and picnic between boxed hedges, or to shop in the trio of beautiful arcades that frame the garden: the Galerie de Valois (east), Galerie de Montpensier (west) and Galerie Beaujolais (north). However, it's the southern end of the complex, polka-dotted with sculptor Daniel Buren's 260 black-and-white striped columns, that has become the garden's signature feature.

This elegant urban space is fronted by the neoclassical Palais Royal (closed to the public), constructed in 1633 by Cardinal Richelieu but mostly dating to the late 18th century. Louis XIV lived here in the 1640s; today it is home to the Conseil d'État.

The Galerie de Valois is the most upmarket arcade, with designer boutiques like Stella McCartney and Pierre Hardy. Across the garden, in the Galerie de Montpensier, the Revolution broke out on a warm mid-July day, just three years after the galleries opened, in the Café du Foy. The third arcade, tiny Galerie Beaujolais, is crossed by Passage du Perron, a passageway above which the writer Colette (1873–1954) lived out the last dozen years of her life.