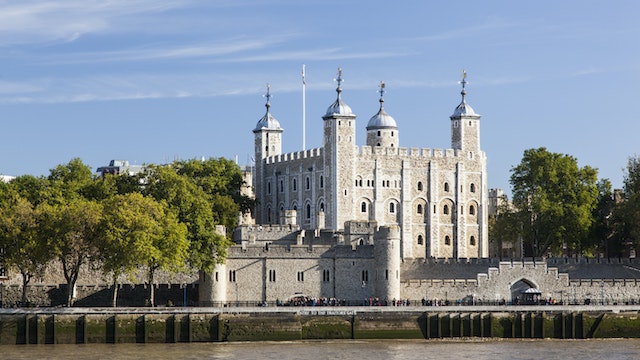 Few parts of the UK are as steeped in history or as impregnated with legend and superstition as the titanic stonework of the Tower of London. Not only is this fabulous fortress an architectural odyssey, but also there are the world's largest diamond, free tours from magnificently attired Yeoman Warders (better known as "Beefeaters"), a dazzling array of armor and weaponry, and a palpable sense of ancient history at every turn.

It has been a royal residence, a treasury, a mint, an armory and a zoo, but it's perhaps most remembered as the prison where a king, three queens and many nobles met their deaths. Most visitors head straight to the Waterloo Barracks, which contains the spectacular Crown Jewels, including the platinum crown of the late Queen Mother, set with the 106-carat Koh-i-Nûr (Persian for "Mountain of Light") diamond, and the Imperial State Crown, worn by the monarch at the State Opening of Parliament. Slow-moving walkways slide wide-eyed visitors past the collection.

Look out for the Tower's famous ravens, which legend says could cause the Tower, and therefore the kingdom, to collapse should they leave (a spare bird is kept in the aviary, and their wing feathers are clipped in case they get any ideas). They are free to roam within the walls during the daytime.

To fully appreciate all of the Tower's roles through its vast history – as well as gawp at the Crown Jewels and meet the famous ravens – you'll need to allow at least half a day here.

Started in the 1070s by William the Conquerer, the striking White Tower is London's oldest building, with its solid Norman architecture and four turrets. On the entrance floor is a collection from the Royal Armouries, including Henry VIII's commodious suit of armor. One floor up is the impressive but unadorned 11th-century Chapel of St John the Evangelist, which was once used as the national record office.

Southwest of the White Tower is the Bloody Tower, where 12-year-old Edward V and his little brother Richard were held by their uncle, the future Richard III, and later thought to have been murdered to annul their claims to the throne. Sir Walter Raleigh did a 13-year stretch here too under James I, and wrote his Historie of the World.

Near the Chapel Royal of St Peter ad Vincula stood the Tower Green scaffold, where nobles such as Anne Boleyn and Catherine Howard (Henry's second and fifth wives) were beheaded.

Book online in advance for cheaper rates, and start your day early to make the most of your visit ahead of the crowds. Allow at least half a day for your visit. There are stairs and cobbled paths throughout the site, and wheelchair access is limited.