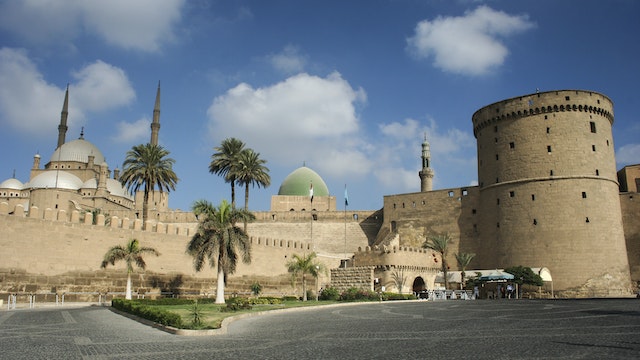 Sprawling over a limestone spur on the city's eastern edge, the Citadel, started by Saladin in 1176 as a fortification against the Crusaders, was home to Egypt’s rulers for 700 years. Their legacy is a collection of three very different mosques, several palaces (housing some either underwhelming, or nearly-always closed museums) and a couple of terraces with superb Cairo views – on a clear day you'll see Giza's Pyramids poking up in the far distance.

Following their overthrow of Saladin’s Ayyubid dynasty, the Mamluks enlarged the complex, adding sumptuous palaces and harems. Under the Ottomans (1517–1798) the fortress expanded westward and a new main gate, the Bab Al Azab, was added, while the Mamluk palaces deteriorated. Even so, when Napoleon’s French expedition took control in 1798, the emperor’s savants regarded these buildings as some of the finest Islamic monuments in Cairo.

This didn’t stop Mohammed Ali – who rose to power after the French – from drastically remodelling, and crowning the complex with the Ottoman-style mosque that dominates Cairo’s eastern skyline. After Mohammed Ali’s grandson Ismail moved his residence to the Abdeen Palace, the Citadel became a military garrison. The British army was barracked here during WWII, and Egyptian soldiers still have a small foothold, although most of the Citadel has been given over to tourists.