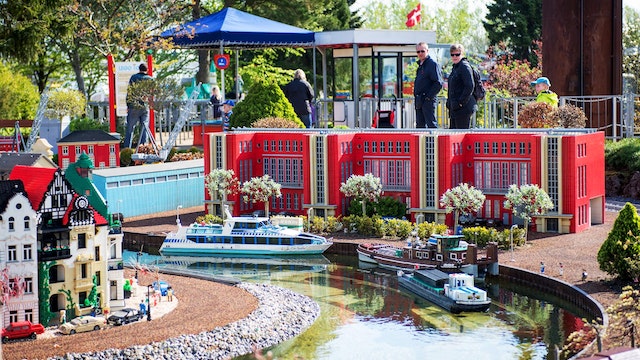 Mind-blowing Lego models, fun rides and the happy-family magic associated with great theme parks have transformed Legoland into Denmark’s most visited tourist attraction outside of Copenhagen. It’s a great day outing (you’ll need a day to do it justice) and it sits smack-bang in the middle of Jutland, 1km north of Billund.

You can’t help but marvel at the brilliant Lilliputian models of the Kennedy Space Center, Amsterdam, Bergen or a Scottish castle and you’ll no doubt vow to head home and drag your Lego out of storage to see what masterpiece you can create. In Miniland you can also do some advance sightseeing of Danish landmarks including Copenhagen’s Nyhavn, Ribe, Skagen and various royal palaces. Or take a trip in miniboats past landmarks such as the Statue of Liberty, the Acropolis and an Egyptian temple. The reconstructions are on a scale of 1:20 to 1:40 and the attention to detail is incredible. The park’s largest piece, a model of Indian chief Sitting Bull, was built with 1.4 million Lego bricks. (The smallest piece? A Miniland dove, built from four small white bricks.)

Pick up a map to assist with further exploration. The park is divided into themed areas, including Legoredo Town, a Wild West area that's home to a haunted house; Knights’ Kingdom, where a medieval castle awaits; Pirate Land, which hosts ships, sword-play and a swimming area; Ninjago World, the place to battle a ninja-loathing serpent; Adventure Land, a strange hybrid of Indiana Jones meets Egypt; Polar Land, with a roller coaster and a penguin habitat; and Duplo Land, with plenty of safe, simple rides and activities for littlies.

For some downtime stop by Atlantis, an aquarium built around Lego models of divers and submersibles. For the chilled park-goer there are placid rides, from merry-go-rounds to a tranquil train ride; adrenaline junkies should seek out the roller coasters. Once the entrance fee is paid, all rides are free – the only exception is the SEAT Driving School (99kr), for kids aged seven to 13.

Note that the admission price is slightly cheaper if you buy your tickets in advance online.