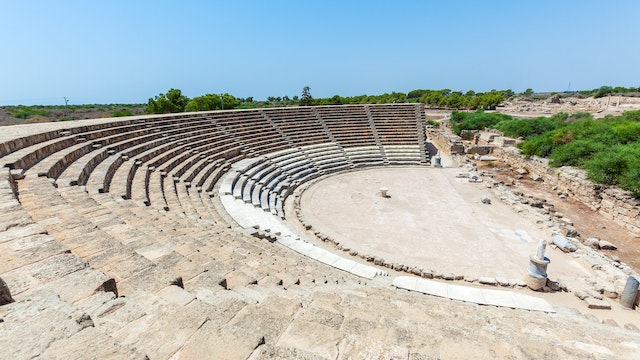 According to legend, Salamis was founded around 1180 BC by Teucer (Teukros), son of Telamon, king of Salamina, on the Greek mainland. Brother to the hero Ajax, he was unable to return home from the Trojan War after failing to avenge his brother’s death.

Today the vast, scattered remnants of this ancient kingdom, 9km north of Famagusta on the seaward side of the Famagusta–Boğaz Hwy, are one of the island’s premier archaeological sites.

After its legendary beginnings, Salamis later came under Assyrian rule; the first recorded mention of it is on an Assyrian stele dated to 709 BC.

After a land and sea battle between the Greeks and the Persians in 450 BC the city (and island) submitted. The city remained under Persian control until the great patriot king Evagoras fought for and obtained independence. During his reign Salamis flourished. It issued its own money and nurtured a thriving philosophical and literary scene, receiving noted Greek thinkers and poets.

Later, after Alexander the Great put an end to Persian domination across the island, the city saw a short period of peace. Nicocreon (the last king of Salamis) submitted to Alexander’s rule and after Alexander’s death, continued to cooperate with the subsequent Ptolemaic rulers, quelling uprisings in other Cypriot kingdoms. Nicocreon’s death in 311 BC remains a mystery. Some texts says that he committed suicide while others hold that he was murdered. What is clear is that despite Ptolemy rule over Salamis lasting until 58 BC, the city began to flounder after Nicocreon’s death.

It wasn’t until Cyprus became a Roman colony that the city prospered again, through rebuilding and public works. It went on to suffer two earthquakes and a tidal wave, requiring rebuilding once more, courtesy of Emperor Constantine II. In AD 350 the city was renamed Constantia and declared Episcopal.

Constantia suffered similar problems to its predecessor and in the 7th and 8th centuries it suffered Saracen Arab raids.

Its silted-over harbour became unusable and the city was essentially forgotten. Many of its stones were later used to build Famagusta.

The remains of the city’s gymnasium, with columned courtyard and adjacent pools, used for exercise and pampering, allude to Salamis’ original grandeur. Its northerly portico is surrounded by headless statues despoiled by Christian zealots as symbols of pagan worship. Many that had survived numerous raids have disappeared since 1974. Fortunately, some made it to Nicosia’s Cyprus Museum and are now prized exhibits.

East of the portico are the Hellenistic and Roman baths, where you can see the exposed underfloor heating system. The southern entrance has a fresco of two faces, and in the south hall are two of the site’s finest mosaics, dating from the 3rd and 4th centuries AD.

One mosaic depicts Leda and the Swan, the other Apollo and Artemis combating the Niobids. Some believe that the latter is a scene of a battle between warriors and Amazons.

Dating from the time of Augustus (31 BC to AD 14), the theatre once held 15,000 spectators. Much of it was destroyed by earthquakes, leaving stone raiders to seize its blocks for building projects elsewhere. Since then, it has been partially restored and occasionally hosts outdoor events.

South of the theatre, the villa was originally a two-storey structure made up of a reception hall and an inner courtyard with columned portico. The villa was utilised long after the city was finally abandoned and used as an olive-oil mill. The grinding stone can still be seen today.

The vast remains of this 4th-century basilica are an entrancing spot with lonely columns backed by the sea. Originally it would have been an impressive church with three apses. In the complex behind the church (believed to have contained a bathhouse) there is an intricate, well-preserved mosaic floor.

Once the largest basilica in Cyprus, this church was built during the episcopacy of Epifanios (AD 386–403) and completely destroyed during Arab raids in the 7th century.

At the southern end of the site you come to the Roman-era reservoir, which stored the water brought to Salamis by a 50km aqueduct.

Just behind the reservoir are the sparse remains of Agora – the city’s place of assembly during the Roman era – and the Temple of Zeus which the Romans built over an earlier Hellenistic temple. Not much remains from either complex, the stones having long been pilfered for other building projects.