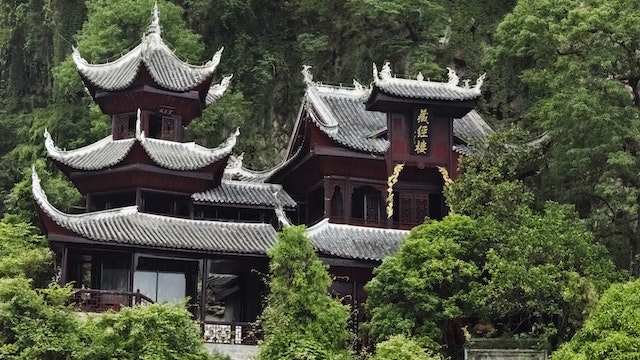 Across the river from the old town, the epic vertical warren of temples, grottoes, corridors and caves of Qīnglóng Dòng rises up against Zhonghe Mountain (中和山, Zhōnghé Shān). Flooded with lights at night, it forms a sublime backdrop to the town. Put aside a good hour for exploration: it’s a labyrinth and there’s a lot to see, including some choice panoramas.

The intriguing complex was commenced in the Ming dynasty, its temples dedicated to the three faiths of Buddhism, Taoism and Confucianism. At the far entrance to Zhongyuan Cave (中元洞, Zhōngyuán Dòng) is a stone table allegedly used by the eccentric founder of taichi, Zhang Sanfeng. The exterior of the splendid Wanshou Palace (万寿宫, Wànshòu Gōng) – once the Jiangxi Guildhall – is still bedecked with slogans, its interior of delightful woodcarvings a prime example of the style of architecture famed in Jiangnan city. The unruffled Jade Emperor presides over everything – including some fine views – from the Jade Emperor Pavilion (玉皇阁, Yùhuáng Gé) at the top. Watch out when walking, as some of the stone steps are very slippery.