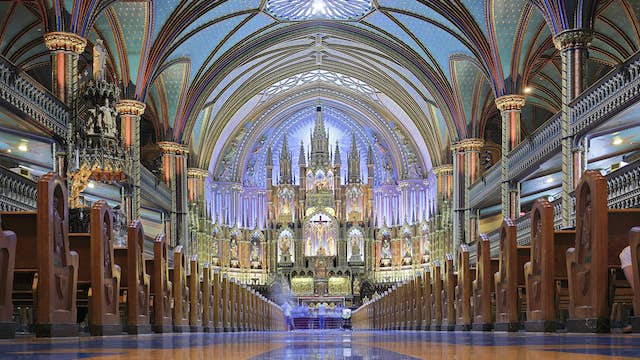 Originally it was a humble building dating from 1683; The Sulpicians commissioned architect James O’Donnell to design what would be the largest church north of Mexico. It opened in 1829. He converted to Catholicism from Protestantism so he could have his funeral in the basilica, and is buried in the crypt.

Everything, from the great bell in the western tower to the 1891 organ with its 7000 pipes and the stained-glass windows depicting the city’s history, speaks of the strong faith of the congregations of yesteryear.

The basilica made headlines in 1994 when singer Céline Dion was married under its soaring midnight-blue ceiling, and again in 2000 when Jimmy Carter and Fidel Castro shared pall-bearing honors at the state funeral of former Canadian prime minister, Pierre Trudeau.

While decoration is fairly minimal on the stone facade, you'll note three prominent statues: the Virgin Mary in the center (patron saint of Montréal), St John the Baptist (representing Québec) to the right, and St Joseph (for Canada) to the left.

The basilica has a spectacular interior with a forest of ornate wood pillars and carvings made entirely by hand (and constructed without the aid of a single nail). Gilt stars shine from the ceiling vaults and the altar is backlit in evening-sky blues. The stained-glass windows are conspicuous for their depiction of events in Montréal's history rather than the usual biblical scenes.

The basilica is home to a famous 7000-pipe Casavant Frères organ, which you can hear played at festivals and concerts throughout the year. Check if the Take a Seat at the Organ tour is running, as it allows you to get up close.

The bell in the West Tower, known as Jean-Baptiste, weighs nearly 12 tons (10,900 kg). It's said to be the biggest bell in North America.

A popular place for regular Montréalers to tie the knot is the much smaller Chapelle du Sacré Cœur behind the main altar. Rebuilt in a hodgepodge of historic and contemporary styles after a 1978 fire, its most eye-catching element is the floor-to-ceiling bronze altarpiece.

The spectacular orchestral light show Aura Basilica is currently not running, but when it resumes, expect a dazzling performance that celebrates the beauty of the basilica.

Guided tours (20 minutes) are part of the entry fee, but at this time, the basilica is not open for any tourist activities. Once the site reopens to tourists, you can pay an additional fee to have an hour-long guided tour, giving you access to the 2nd balcony and parts of the crypt. Check the basilica's website for the latest information.