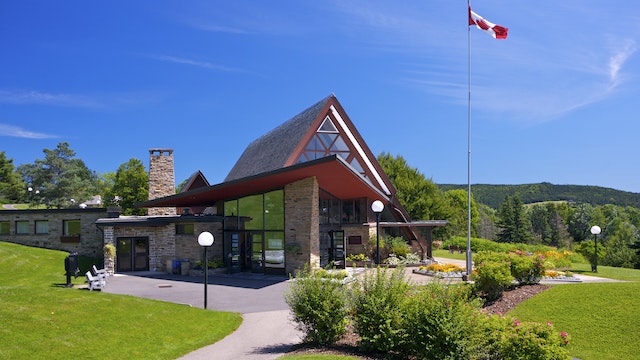 Telecommunications pioneer and inventor Alexander Graham Bell fell in love with Bras d'Or during a family holiday – apparently the hilly scenery reminded him of his Scottish homeland. In the late 1880s he built a lavish summer estate, Beinn Bhreagh (Gaelic for beautiful mountain), on a peninsula across the bay from Baddeck. This fascinating museum at the edge of town houses full-scale replicas of Bell's groundbreaking Silver Dart aircraft, along with electrical devices, telegraphs, telephones, kites and medical inventions.

It's an enlightening insight into the restless and curious mind of one of the 19th century's great inventors. Though he's understandably best known as the inventor of the telephone, Bell explored many areas, particularly the idea of human flight. He conducted his first experiments at Beinn Bhreagh, culminating in the development of the Silver Dart airplane, which took off from the ice of Baddeck Bay on 23 February, 1909, just over five years after the Wright Brothers' first flights.

Bell also developed one of the earliest hydrofoils, a boat design that uses wing-like foils to gain greater speed on the water. You can see a replica of it at the museum, along with family photo albums, tetrahedral kites, notebooks and even Bell's own beloved walking stick. Special 'white glove' tours allow you to access parts of the collection not normally open to visitors; ask at the ticket desk for details.

After a long and storied career, Bell was buried at his beloved Beinn Bhreagh in 1922, aged 75.