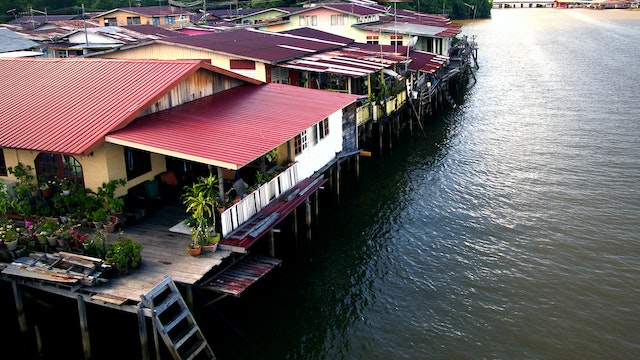 Home to around 30,000 people, Kampong Ayer consists of 42 contiguous stilt villages built along both banks of the Sungai Brunei (Brunei River). A century ago, half of Brunei's Malay population lived here, but life is changing along the river, and many old wooden homes are falling into decay, while smart new, government-built stilt homes are appearing on concrete plinths among the wooden boardwalks. Flag down a water taxi (B$1) and explore for a taste of what Brunei was like before oil changed its fortunes.

Founded at least 1000 years ago, the village is considered the largest stilt settlement in the world. When Venetian scholar Antonio Pigafetta visited Kampong Ayer in 1521, he dubbed it the 'Venice of the East', which is, as descriptions go, a bit ambitious. Although motorboats have replaced the traditional skiffs and rafts that used to ply the channels between the houses, most of the villages are still dominated by fading timber homes, painted sun-bleached shades of green, blue, pink and yellow.

While the over-water lifestyle still appeals to many Bruneians, the draughty wooden houses do not; many areas of the village are being redeveloped by the government, with tidy rows of modern stilt homes, each with their own personal boat jetty. The water villages used to be the epicentre of traditional industries, such as silversmithing, goldsmithing, the weaving of fine cloth and boat making. Boat making is still something you can see easily, but to find the weavers you need to go with an operator who can arrange a demonstration in advance.

Wandering around the rickety wooden boardwalks is a fascinating introduction to the Bruneian way of life, but be prepared for a fair amount of rubbish strewn across the intertidal mud between the houses. As well as the area across the river from the BSB waterfront, take a wander along the shore-side villages west of the Omar Ali Saifuddien Mosque, where you'll see luxury cars lined up on the shoulder of the road, belonging to wealthier stilt-village residents.