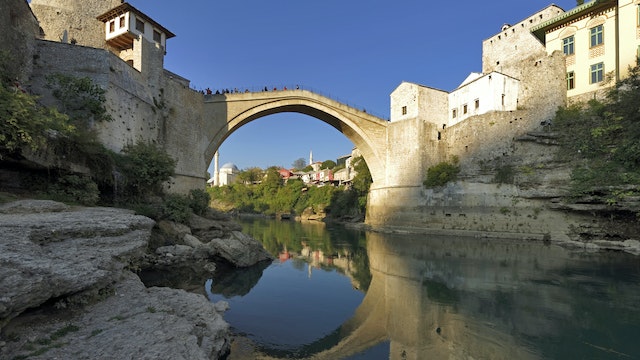 The world-famous Stari Most (meaning simply 'Old Bridge') is Mostar's indisputable visual focus. Its pale stone magnificently reflects the golden glow of sunset or the tasteful night-time floodlighting. The bridge's swooping arch was originally built between 1557 and 1566 on the orders of Suleiman the Magnificent. The current structure is a very convincing 21st-century rebuild following the bridge's 1990s bombardment during the civil war. Numerous well-positioned cafes and restaurants tempt you to sit and savour the splendidly restored scene.

An engineering marvel of its age, the bridge was nonetheless pounded into the river during a deliberate Croatian artillery attack in November 1993. Depressing footage of this sad moment is shown on many a video screen in Mostar. After the war, Stari Most was painstakingly reconstructed using 16th-century building techniques and stone sourced from the original quarry. It reopened in 2004 and is now a Unesco World Heritage site famed for its bridge divers.