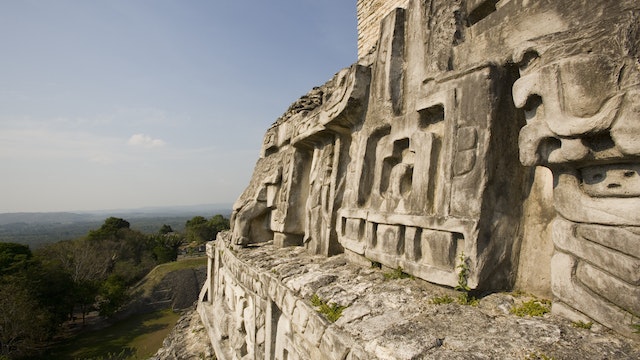 Set on a leveled hilltop, Xunantunich (shoo-nahn-too-neech) is one of Belize's most easily accessible and impressive Maya archaeological sites. Getting here is half the fun, with a free hand-cranked cable ferry taking you (and vehicles) across the Mopan River. Xunantunich may have been occupied as early as 1000 BC, but it was little more than a village. The large architecture that we see today began to be built in the 7th century AD.

From AD 700 to 850, Xunantunich was possibly politically aligned with Naranjo, 9 miles west in Guatemala. Together they controlled the western part of the Belize River valley, although the population probably never exceeded 10,000. Xunantunich partially survived the initial Classic Maya collapse of about 850 (when nearby Cahal Pech was abandoned), but was deserted by about 1000.

The site centers on Plazas A-2 and A-1, separated by Structure A-1. Just north of Plaza A-2, Structure A-11 and Plaza A-3 formed a residential 'palace' area for the ruling family. The dominant El Castillo (Structure A-6) rises 130ft high at the south end of Plaza A-1. El Castillo may have been the ruling family's ancestral shrine where they were buried and/or represented in sculpted friezes. Structures A-1 and A-13, at either end of Plaza A-2, were not built until the 9th century and would have had the effect of separating the ruling family from the rest of the population, possibly a response to the pressures that came with the decline of Classic Maya civilization at that time.

You can climb to the top of El Castillo to enjoy a spectacular 360-degree view. Its upper levels were constructed in two distinct phases. The first, built around 800, included an elaborate plaster frieze encircling the building; the second, built around 900, covered over most of the first and its frieze. The frieze on the east end of the building and part of the western one have been uncovered by archaeologists; these depict a series of Maya deities, with Chaac, the rain god, probably the central figure at the east end. The friezes you see today are replicas, with the originals underneath for safekeeping.

South of El Castillo is a partly overgrown area of lesser structures (Group C) that were abandoned as the city shrank after 900, leaving El Castillo (formerly at the center of the ancient city) on the southern edge of the occupied area.

There's a visitors center just past the ticket office. Inside are archaeological finds from the site, including pottery and jewelry, an interesting burial site and explanations of the El Castillo friezes.

To reach the ruins, take the ferry in San José Succotz village, then it's about 1 mile uphill to the parking lot and ticket office. Any bus from San Ignacio can drop you at the ferry point.