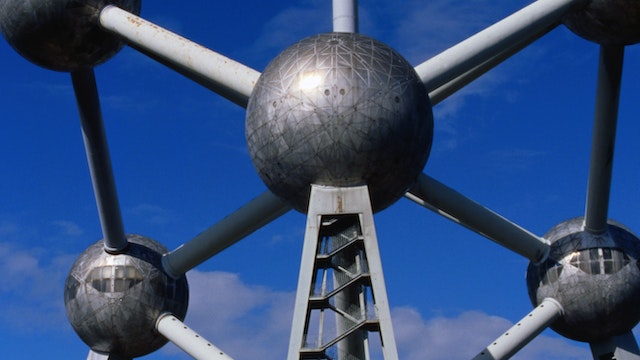 The space-age Atomium looms 102m over north Brussels’ suburbia, resembling a steel alien from a '60s Hollywood movie. It consists of nine house-sized metallic balls linked by steel tube-columns containing escalators and lifts. The balls are arranged like a school chemistry set to represent iron atoms in their crystal lattice…except these are 165 billion times bigger. It was built as a symbol of postwar progress for the 1958 World’s Fair and became an architectural icon, receiving a makeover in 2006.

At night the spheres sparkle magically, and the panorama-level restaurant reopens at 7pm (except during midsummer), putting starched cloths on its functional tables and serving decent dinners with a view. Dinner guests don’t pay the tower entrance fee, but reservations are essential.