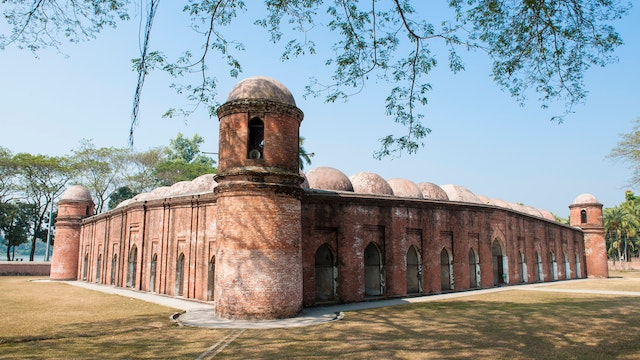 Built in 1459 (the same year Khan Jahan Ali died), the famous Shait Gumbad Mosque is the largest and most magnificent traditional mosque in the country. Shait Gumbad means ‘the Temple with 60 Domes’ – a misnomer considering there are actually 81. This fortress-like structure has unusually thick walls, built in the tapering brick style, and is a hugely impressive sight. The overall architectural influence is unmistakably Turkish, and the arches within the main hall are a graceful exercise in geometry.

Admission includes entrance to the museum, which is within the grounds of the mosque. Note that women travellers have been known to be refused entry into the main mosque (a sign at the entrance of the mosque says as much), although this isn’t always the case. Many of the domes as well as the entire western wall were under restoration at the time of research, which resulted in the structure being swathed in a dull pink shade of lime mortar.