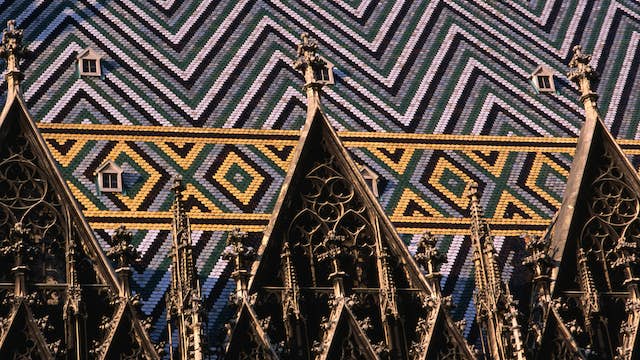 Vienna’s Gothic masterpiece Stephansdom – or Steffl (Little Stephan), as it’s ironically nicknamed – is Vienna's pride and joy. A church has stood here since the 12th century, and reminders of this are the Romanesque Riesentor (Giant Gate) and Heidentürme (Towers of the Heathens). From outside, the first thing that will strike you is the glorious tiled roof, with its dazzling row of chevrons and Austrian eagle. Inside, the magnificent Gothic stone pulpit presides over the main nave, fashioned in 1515 by Anton Pilgrim.

One often-overlooked detail is the pulpit’s handrail, which has salamanders and toads fighting an eternal battle of good versus evil up and down its length. The baroque high altar, at the very far end of the main nave, shows the stoning of St Stephen. The chancel to its left has the winged Wiener Neustadt altarpiece, dating from 1447; the right chancel has the Renaissance red-marble tomb of Friedrich III. Under his guidance the city became a bishopric (and the church a cathedral) in 1469. Note that the main nave is closed during Mass (held up to eight times a day).

The all-inclusive ticket covers the audio-guided tour, a catacomb tour, the south tower and the north tower. Guided tours lasting 30 minutes include a visit to the nave.