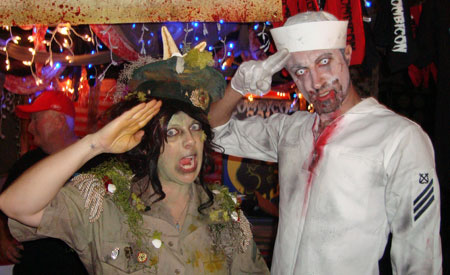 There are a lot of images and words people associate with Southwest Florida. Sun, sand, shelling. Calm waters that color from green to teal. Art galleries, cypress swamps and mangroves. Zombies.

Indeed. On October 15, 2011 Lee County will host the 5th annual Zombicon, which touts itself as 'the largest gathering of zombies and those who love them, in the state of Florida, and possibly the world'. Independent verification of this claim is not really possible, but we’ll take the Zombicon public relations team at its word.

The event, to say the least, rocks Lee County and then some. During Zombicon weekend, literally thousands of undead shamble along the pretty streets of downtown Fort Myers, past chic boutiques, coffee shops, flash restaurants and sexy bars like Spirits of Bacchus; the visual effect is jarring, as folks dine on sushi and tapas and sip glasses of Pinot Noir and Chardonnay and then – bleeeearrgh – dozens of folks who could be extras in a George Romero movie shamble by.

We didn’t mention Romero by accident, by the way; his 1985 classic Day of the Dead was partly shot in Fort Myers. That cinematic history brought about 500 artists, creative types, actors and regular folks – all would-be zombies – to town for the first Zombicon back in 2007.

Since that year, up to 10,000 people/undead take to the streets of Fort Myers every year to engage in what is, essentially, a huge horror-themed flash mob mixed with a healthy dose of comedy and improvisational theater. Zombicon is run by Pushing Daizies, a non-profit that uses the arts to better the surrounding community; the gathering of the dead happens to be a major charity event and canned food drive, and this year there is free entry to the carnival with a canned food donation. Arts-related activities punctuate the gathering – there are acting workshops, gallery exhibitions and makeup tents. This intersection of arts and the community is not a coincidence. Lee County, via places like Matlacha and Sanibel Island, is an artists’ beacon, and local creative types like to get good-heartedly subversive with events like Zombicon.

That phenomenon speaks to something a bit deeper then just dressing up as walking corpses. Let’s take it back to Romero: most of Day of the Dead takes places in a mall, partly because Romero believed mass consumerism sucked human interaction out of everyday life, turning people into, well, zombies. 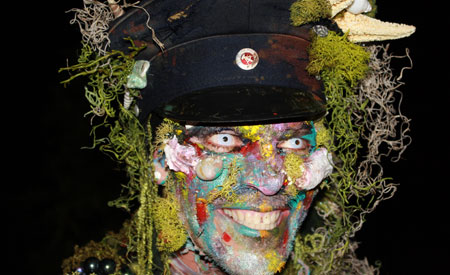 Enter Zombicon, with its wacky costumes, unfettered self-expression, amateur arts and charity focus. If the zombies of Day of the Dead are stand-ins for selfish conformists, Zombicon is actually a gathering of anti-zombies: folks who like to go outside the box and do something for their community.

Of course, if that all seems like fuzzy philosophizing, let’s make it simple: Zombicon is a lot of fun. Folks go crazy, but in a manageable, Halloween-y kinda way with face painting and acting classes that even families can appreciate. That said, there’s plenty of adult fun too; a pack of single, skimpily-clad zombettes is the sort of sight that redefines the term ‘nightlife.’ In the meantime, canned food is gathered, charities are supported and good is done for the community. And this year, Zombicon hopes to set a world record for the most zombies gathered in one place. If that doesn’t appeal to you, you’re just dead inside.