The stuff of travel writers' nightmares

Travel nightmares touch us all to some degree. Despite a natural tendency to feel like we've been selected for special punishment as the nightmare unfolds, it's just part and parcel of the uncertainty that we implicitly agree to when we plan a trip.

When a travel writer suffers in the line of duty, however, it's another story. A setback, extended delay or emergency is not only an inconvenience, but a potential snowball of consequences that can affect deadlines, income, expectant editors, financially invested publishers and even long-term careers.

I asked a group of accomplished travel writers about their most nightmarish experiences on the road; their unsettling tales ran the gamut from drifting down a ghost river to sleeping in the path of a hurricane...

Curse of the buses 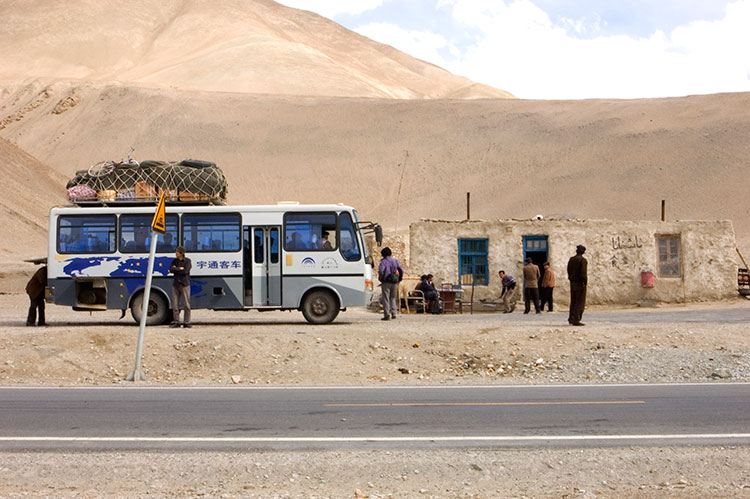 I am standing at the edge of the curb, trembling in fear. I have done nothing wrong, and yet doom is headed my way - a doom I cannot avoid, a fate into which I will willingly step. And there, from around the corner, heading down the street, it appears: the bus.

Nothing good has ever happened to me on a bus. In Croatia, my bus stopped for a snack break — and left me in Split while I was eating a greasy borek. In Vietnam, women started puking into plastic bags once the bus’s wheels started rolling. In city after unfamiliar city, I board buses, politely ask drivers to let me know when to get off, and then, when I inquire again 30 minutes later, routinely hear, 'What are you still doing here?'

This never happens on subways, trams, funiculars, taxis, ferries, or airplanes. Yet I board a bus, and misery descends. Once, on a bus in Chongqing, I suddenly realized my China trip was failing, badly, and I had to flee the country immediately. But once I disembarked, I regained control. The world looked different; better. I was standing on my own two feet, just how I liked it.

Matt Gross is the editor of BonAppetit.com, the former Frugal Traveler columnist for the New York Times, and the author of The Turk Who Loved Apples: And Other Tales of Losing My Way Around the World. He tweets @worldmattworld.

I was in Cuba on assignment - which also happened to be my honeymoon. When my husband and I checked into a casa particular in the town of Viñales, our hostess had a message: 'You can stay here, but when the hurricane comes you can’t leave the house, or I’ll get in trouble.' We had no idea a hurricane was expected, yet when she turned on the TV, there it was - the outline of the island with three trajectories, and one was right through Viñales. Her cement house looked strong enough, so we agreed.

The next night, as the winds blew, we stayed up all night playing dominoes with the homeowners, trading glasses of the tequila we'd brought from Mexico with the rum from their kitchen. While the hurricane took another course through Cuba, the potential disaster for me had a happy turn of events: we’d made some fantastic Cuban friends.

Journey down the lonely Mississippi 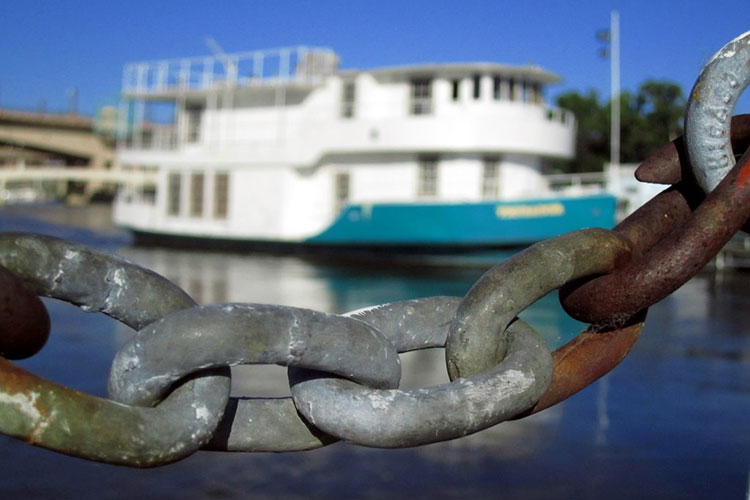 A houseboat on the Mississippi River. Image by Tiger Girl / CC BY 2.0.

In the summer of 2005 I had a contract to write a book about going down the Mississippi River in a houseboat. In July I went to La Crosse, Wisconsin, where I found two river rats named Tom and Jerry. Jerry had a houseboat he wanted to move south to Tennessee. The plan was they’d take me as far as Cairo, Illinois, where I’d find another houseboat or hop a barge to go the rest of the way to New Orleans.

The boat was Jerry’s – an old battered-up River Queen that had been sitting on a trailer in a parking lot for the past five years. Tom and Jerry promised they’d spruce her up and make her seaworthy. But in late August Hurricane Katrina struck. For days the news was uncertain, but then it was clear that New Orleans was devastated, its port closed, river traffic at a standstill.

In early September I set sail down a ghost river in a boat that had no bathroom, no electricity, no screens – essentially a floating hull – with no idea where I was going and no idea how, once Tom and Jerry left me at Cairo, I’d get there.

In her travel memoirs Mary Morris has wandered through Mexico, traveled across Siberia, sailed down the Mississippi and now is on the trail of tigers. She tweets @mmorris14. 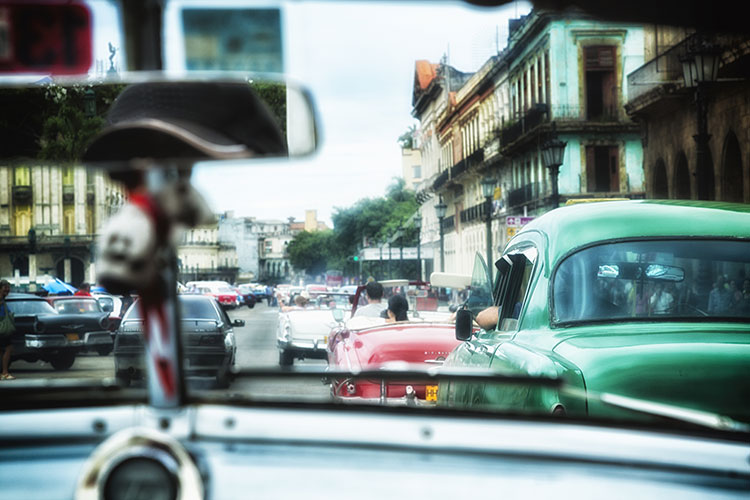 Traffic on the streets of Havana as seen from inside a classic car. Image by Elizabeth Pollaert Smith / Photographer's Choice / Getty Images.

Absurdist anxiety is part of my pre-travel ritual. Book flight, pack bag, run through mental checklist of destination's criminal organizations and flesh-eating viruses. But my disasters have all been quite minor, and things I never thought to worry about.

In Havana, I knew all the scams except the one I encountered, involving a fake taxi driver who lightened my wallet substantially. And one day in Lima, I was wandering around a historic fort - lovely and harmless - when a heavily armed soldier stopped me and said I was trespassing on an active military base. Thankfully, he was more amused than angry, and let me go on my way.

Doug Mack is a freelance writer based in Minneapolis and the author of the travel memoir Europe on Five Wrong Turns a Day. He tweets @douglasmack.

A flat tire to remember

I've been pretty fortunate while on assignment. I haven't broken a bone, had my wallet stolen, or been the victim of a weird scam. I've had my share of 'Delhi belly' while in India but that's a sort of contractual obligation.

Once, while on an assignment in Italy, I got my rental car 'stuck' in the tiny narrow streets of the medieval center of the town of Viterbo. It was nearly impossible to turn the car around, yet I needed to in order to get out. I eventually did but not before hitting a stone step leading up to an apartment. The tire went flat. Which for most people isn't a problem. I'm a bit of a milquetoast, though, and so there I stood on the side of the road, stranded, at 11pm at night...until some macho Italian guys saved me by putting on the spare. Phew.

I resumed my reporting/research the next day and the story came out just fine.

David Farley is the author of An Irreverent Curiosity: In Search of the Church's Strangest Relic in Italy's Oddest Town (which is currently being made into a National Geographic documentary) and a Contributing Editor at AFAR magazine. He tweets @davidfarley.

Sacrifice the bod for the story 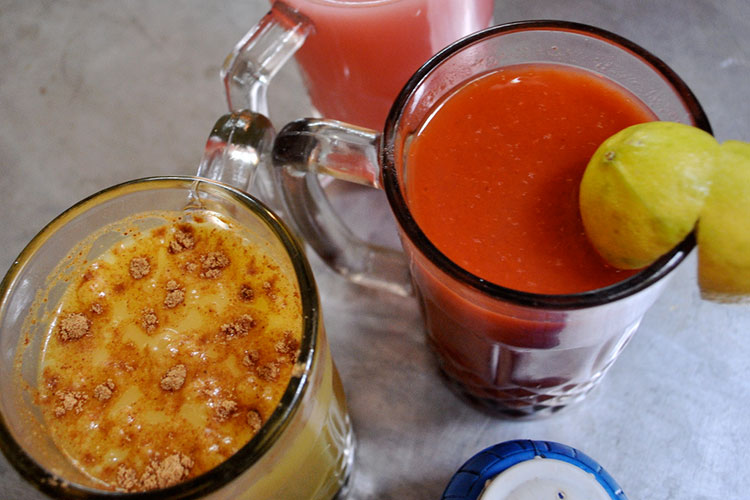 Pulque, a fermented drink made from the agave plant. Image by Katie Bordner / CC BY 2.0.

Sometimes we do things for the story. Mine was pulque, a Mexican fermented drink made from the heart of the agave plant.

At first it was delicious, like a smoothie. The second sip wasn’t as tasty. More like boozy, warm baby food. By the third sip I detected a splash of compost juice on the finish. Or poop? They say the fermentation process begins with feces. Probably untrue, but when I started feeling lethargic and seasick, couldn’t eat, lost seven pounds, and tested positive for giardia, I blamed the pulque.

Would I do it again, for the story? You bet.

Lavinia Spalding is series editor of The Best Women’s Travel Writing, and the author of Writing Away: A Creative Guide to Awakening the Journal-Writing Traveler. She tweets @laviniaspalding.

Leif Pettersen is a Lonely Planet author, freelance travel writer and polyglot. He’s visited 51 countries (so far) and can be found @leifpettersen.