The Space Needle: get to know this Seattle icon 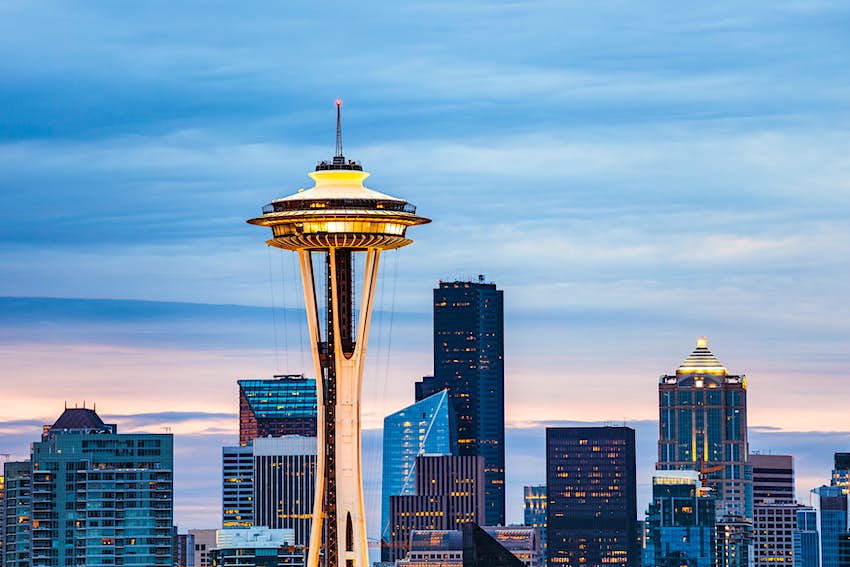 Before Amazon changed the world of online shopping, before Kurt Cobain ushered in the era of grunge rock, and even before Starbucks poured its first cup of coffee, the Space Needle was an iconic symbol of Seattle. And while many events have changed the culture and skyline of Seattle in the ensuing decades, the Space Needle has remained a constant fixture.

The completion of a two-year, $100 million renovation dubbed the "Spacelift" in 2018 transformed the landmark, and visitors to the Space Needle will wonder if they’ve wandered into the future.

Note: the Space Needle is open with limited ticket availability. Check the website before visiting, and follow all local COVID-19 guidance.

Why the Space Needle was built

After opening for the 1962 World’s Fair, the Space Needle became as much of an instant celebrity as a building can be – as well known in the US as other iconic structures like the Eiffel Tower in Paris.

"It looked really exotic, but the engineering was not exotic. It was brutal," said Gary Noble Curtis, a structural engineer during the original construction. "We were not breaking any new ground as far as engineering was concerned. We only had 13 months between when we started and when the fair opened."

The deadlines were tight, and the Space Needle was completed merely days before the World’s Fair opened. It was a scramble of passion, grit and the energy of young people – who weren’t afraid of hard work – to put Seattle on the map.

Many of the structures from that World’s Fair remain, such as the Monorail, the Pacific Science Center and Key Arena. At a time when the Space Race was captivating Americans, the futuristic designs throughout the Seattle Center seemed like sci-fi rendered in steel, concrete and glass. Yet the Space Needle was the star of the show – an instant icon that made the Seattle skyline recognizable.

For two decades, the Space Needle stood sentry. The Space Race came to an end, but the Needle stayed the same beyond internal cosmetic changes. Then, in 1982, a controversial banquet facility was added at a lower level; in 2000, a major renovation updated the entry and restaurant. Still, the tower cried out for a truly innovative upgrade.

"55 years ago, when we built it, it felt real modern," Noble Curtis said. "But it was really getting tired: the decor, the way things were."

The conversation about making a dramatic change to Seattle’s most iconic building started at the tower’s 50th Anniversary celebration in 2012, said Space Needle historian Knute Berger.

"They started thinking: what’s the next 50 years going to look like?" he said. "One hundred years from when we were built, what’s going to excite people? What can we do to get ready for that next 50 years? They decided to make sure it’s still functional, to update it, but they also wanted to inject a sense of thrill that people experienced in 1962."

A Space Needle for the future

Leaning on history – and the fact that the profile of the Space Needle is a historic landmark – the decision was made to try and launch the Space Needle from the past to the future. Decades of dark, dated design were replaced with 176 tons of glass, offering panoramic views of Seattle and the surrounding region.

"The view experience is one of critical parts of why people go up there," Berger said. "The view is Seattle: the thing that people take away is the stunning beauty of the setting, and they have enhanced that."

The change is dramatic. It can also be terrifying – the new design includes a rotating glass floor that offers views of the turning mechanism and beyond that, 500 ft straight down, is the ground.

It’s this rotating glass floor which engineer Wade Morris believes is the most radical aspect of the new design.

"It’s unique that we expose the drive mechanism," he said. "None of the other rotating structures try to expose those or highlight them, even."

It’s easy to become mesmerized by the smoothly turning glass plates and ever-evolving view beneath your feet while exploring the new lower viewing deck. But the renovation is about more than just the view. As when the Space Needle opened in 1962, the building has a greater significance.

"Psychologically, the creation of the Space Needle was part of trying to rebrand Seattle as a tech city," Burger said. "Before the renovation, it was sort of speaking to that in a nostalgic way. The excitement that the glass technology adds gives it a more contemporary sense of aspiration."

Noble Curtis agrees. "I would hope that they would think in terms of hope for the future," he said. "That all of a sudden, things can change and be better."

As Seattle-area companies such as Blue Origin work to send people to space, this "new" Space Needle feels like a positive omen: that the space age people dreamed of in the 1960s will come to pass – and Seattle will be one of the cities leading the way.

Article first published in October 2018, and last updated in September 2020

5 US ski towns you can enjoy without hitting the slopes

14 amazing places to go in Patagonia for adventure, wildlife and culture

Europe's Christmas markets 2021: How COVID and cancellations could impact your trip

Find free fun in the sun in Puerto Rico