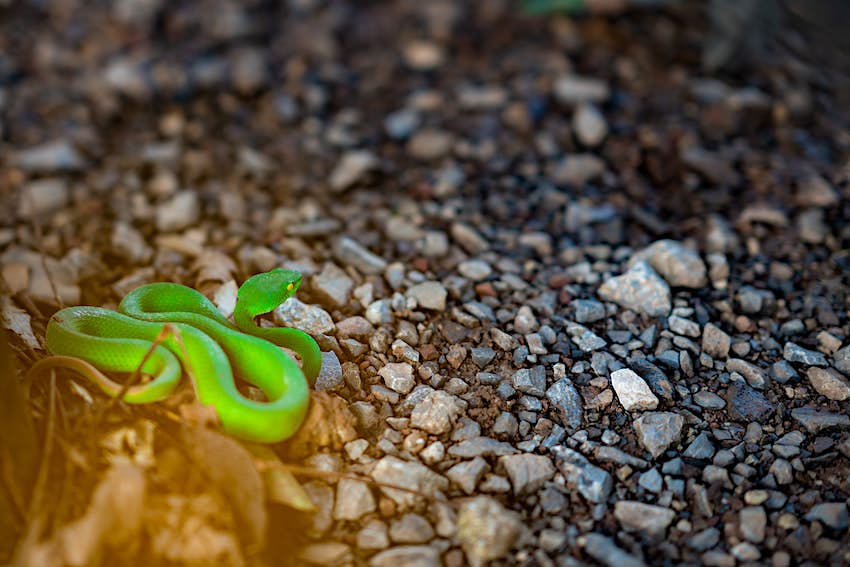 Researchers discovered a new species of green pit viper in the forests of northeast India and named it after Salazar Slytherin, a fictional character from the Harry Potter books.

For the uninitiated, Salazar Slytherin was one of the co-founders of the Hogwarts school in the Harry Potter series, a great wizard with a dark side and a penchant for snakes. He's also the founder of Slytherin, one of the four houses of Hogwarts, that's home to some of the school's most slippery and cunning students. Slytherin himself was a Parselmouth (someone who can speak with snakes) and the colours of his house are green and silver. So it's only fitting that this slippery green snake was named in his honour.

The newly-discovered snake's official name is Trimeresurus salazar, which literally translates to Salazar's pit viper. Trimeresurus is actually the name given to a group of pit vipers who are found throughout East and Southeast Asia. They're described by scientists as "charismatic" and "venomous" and tend to keep to themselves (except for the white-lipped viper species of the group who seemingly choose fight over flight when encountering humans).

There are currently more than 48 species of pit vipers, 15 of which occur in India. But when researchers from the National Centre for Biological Sciences and Bombay Natural History Society discovered this particular snake while out on a night search they knew he was special. After studying the specimen in detail, they were able to distinguish it from all the other known species of pit vipers. A major telltale sign was the orange-red stripe found on the male's head, a characteristic that isn't found among the others in the group. Salazar's pit viper also has more teeth than the others.

The discovery was made near the Pakke Tiger Reserve in Arunachal Pradesh, a "biodiversity hotspot" near the Himalayas that's also India's least explored state, and where all sorts of unusual creatures can be found. This is the second species of pit viper discovered in Arunachal Pradesh in recent years and scientists are hopeful that future surveys of this region may yield more individuals, which could fill in information gaps on the species. They also hope that naming Salazar's pit viper after a character from a beloved book will encourage people to learn more about pit vipers, as well as associated biodiversity documentation and conservation projects that are currently under threat.

The team's findings have been published in a new research paper in the open-access journal Zoosystematics and Evolution. You can read more about it here.

Where to travel based on your Harry Potter Hogwarts house

4 min read • Published in about 1 hour