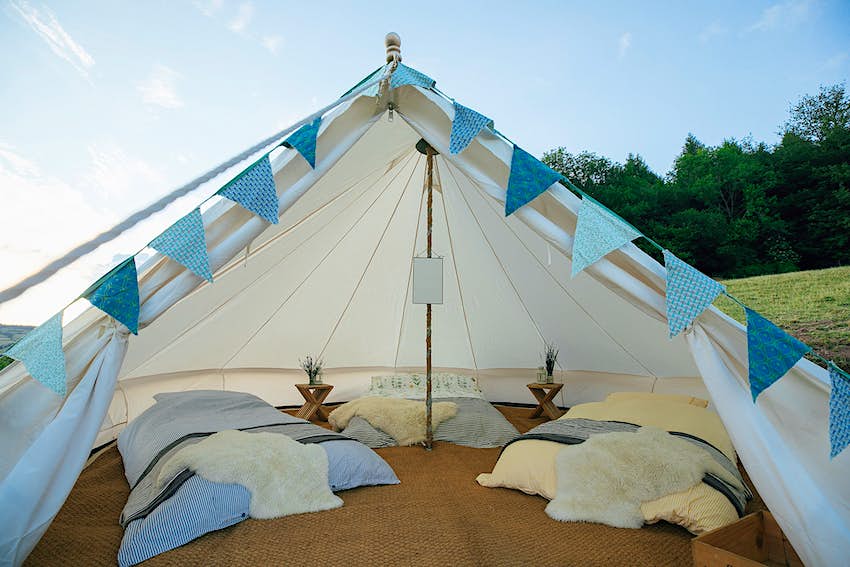 Although some restrictions have now been eased for British travelers, a summer staycation is most likely on the cards for many who have had trips elsewhere canceled. To meet the huge demand for outdoor socially distanced spaces, Canopy & Stars, a platform for booking unique stays in treehouses, cabins and yurts across Europe, has set up the bell tents that would have been set up at music festivals in beautiful locations that aren’t normally used as campsites.

The summer-only project, called Camp Out 2020, has pitched the bell tents in 11 sites, with more in the works. Some glamping spots are near private beaches in Cornwall, ancient woodlands in Gloucestershire, waterfall treks in Wales’ Brecon Beacons National Park, and even alpaca farms in the Cotswolds or on the grounds of sprawling countryside estates. The glamping sites provide air mattresses and bed linens, and some even take it up a notch with wi-fi, rainfall showers, and fire pits for barbecues and late-night smores.

The government allowed campsites in England and Scotland to reopen in early July, and many have seen a record number of bookings from those who are eager to escape lockdown. Prime Minister Boris Johnson said that campsites are permitted to open so long as shared facilities are kept clean and social distancing regulations are adhered to. Campsites in Wales opened a week later on 11 July.

The tents cost from £85 per night and sleep up to four people. The pop-up sites will be in place until September and can be booked online.