Best things to do on Roosevelt Island in New York City 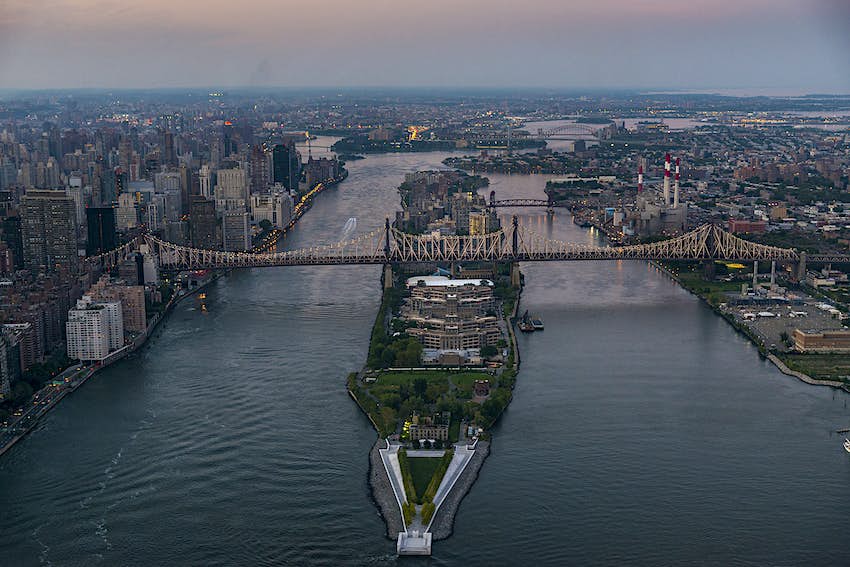 It's a nice update, because the island has long felt lost under the shadow of the Erector-Set Queensboro Bridge in New York's East River. It was once Blackwell Island, then Welfare Island and has been home to insane asylums and prisons, then hospital outpatients and UN workers. The slightly drab, uniform housing (well, for the most part – there are new condos that glimmer slightly more) feels like an improved version of a Stalinist housing block.

Now that things are changing, here are 10 of the best things to see and do while you’re there.

Obviously. For a swipe of the subway MetroCard you can glide over Upper East Side avenues and the East River and reach the island on one of the city's most memorable commutes. Watch this 60-second video with one of the drivers who's worked for the tram since it opened in the '70s.

When architect Louis Kahn died in 1974 so did plans to build his only New York project, a memorial to Franklin D. Roosevelt on the south tip of what was then called Welfare Island. Fortunately, the project was revived and finally opened as Four Freedoms Park in 2012. Comprising an open-topped deck lined with tall granite blocks, the park is certainly a sight to behold. Its event season runs from May to October and includes yoga, book readings, kite flying, public talks and music performances. (If you’re willing to get there obscenely early to snag a spot, it’s also a great vantage point to take in the Fourth of July fireworks.)

Just before you reach Four Freedoms Park, you’ll walk past the ruins of the weed-covered Smallpox Hospital, which, when it opened in 1856, was the first hospital in the country dedicated to the treatment of the infectious disease. Though you aren’t allowed to wander through the ruins (in the interest of safety), you can still get a good glimpse of the aging structure from behind the fence.

The first and only hotel on the island, the Graduate offers views of Manhattan, Queens and beyond. The hotel pays tribute to the rich history of Roosevelt Island with a hallway on the first floor dedicated to photographs of the Roosevelt family, plus a copy of FDR's famous "Four Freedoms Speech" in every guest room. A nod to its location in the center of Cornell Tech, the 1st floor lobby and adjoining area are lined with more than 10,000 textbooks, all of which were donated from the school. Just off the lobby is the island's newest restaurant, Anything At All (the title is a reference to a line in The Great Gatsby for all you bibliophiles), which takes a farm-first approach to contemporary comfort food. Topping it all off (literally) is the Panorama Room, a rooftop bar located atop the hotel. The bar will be opening later this summer and is sure to be another great spot to soak in the views of the surrounding skyline from Roosevelt Island.

It's worth hitting both points of the island. From the south to the north point, it's the equivalent of 35 city blocks north, perhaps a 20-minute pleasant walk from the tram (or a five-minute walk from the terminus of the island bus system, which you can ride for free). Once there you'll reach a lonely Gothic-revival lighthouse, built in 1872 by the city to help light a nearby insane asylum. The asylum's gone, but there are some shaded lawns and sitting spots by the lighthouse that look north towards Randall's Island.

A block south of the lighthouse, this mid-19th-century remnant was built as an island retreat, impressed a young Charles Dickens and then became a hospital before falling into years of neglect. In 2006 it was refashioned as high-end housing. You can visit the "flying staircase" up its winding entry, and there's an adjoining gallery.

The sixth-oldest house in New York City, this clapboard farmhouse built in 1796 dates back to when the island was a private residence (then known as Blackwell island, after its owners). The interior was renovated in 2020 to restore the building's 18th-century decor.

A couple of blocks north of the subway station is RIVAA, a main street gallery that keeps some unusual hours (6-9pm Wed & Fri, 1-5pm Thu, 11am-5pm Sat & Sun). Alongside art by local artists, the gallery also hosts jazz sessions and poetry slams. Works by RIVAA artists are also exhibited in the OCTAGON Gallery in the Octagon Building.

The Roosevelt Island Historical Society runs a small visitor's center in a historic, relocated streetcar entrance kiosk, just next to the tram terminal. The merch is great, and includes a heart-breakingly cute, hand-drawn RI map.

Opened in 2017, the Cornell Tech campus brought an ambitious assortment of buildings and tech entreprenurialism to this sliver of land in the East River. Among the new buildings was the House at Cornell Tech, the first residential high-rise built as a so-called passive house, which requires very little energy. In addition to its striking architecture, the campus also includes two acres of open public space. (You can also drop into the cafe at the campus’s Bloomberg Center to pick up some Big Red Cheddar Cheese Curds, a product of Cornell's Department of Food Science.)

This article was updated in August 2021.

Make the most of your time in the USA with Lonely Planet’s range of travel guides. Be the architect of your own trip as you discover the best things to do in the USA through insider tips, suggested itineraries, and handy maps.

Affordable Fiji: How to choose a resort

7 min read • Published about 3 hours ago

Dallas without dollars: the city's top free things to do