Garish, gregarious Barcelona doesn’t guard its secrets jealously, but the Catalan capital does seem to get a kick from hiding the best of them in plain sight. Lonely Planet Magazine samples the city’s lesser-known delights.

The Gaudí-free guide to architecture

The amazing fin-de-siècle structures that define Barcelona are testament to an exhilaratingly peculiar phase of its cultural history, when sober, wing-collared captains of industry happily commissioned buildings inspired by melted wax and skeletons. Beyond the well-chronicled contributions of Antoni Gaudí, a host of less fêted but just as adventurous architects helped shape Barcelona in the late 19th and early 20th centuries.

Take Josep Puig i Cadafalch - a host of madly turret-clustered townhouses pay tribute to his belief that a Catalan’s home was his castle. And not just his home: Puig i Cadafalch’s Casaramona textile plant – now the CaixaForum museum of contemporary art – looks more like some extravagant fortified palace. Walk out onto the rooftop 'modernist terrace' and you’ll discover that the whole flamboyant edifice is built from nothing more than house bricks.

Say no to Cava and cerveza - and yes to cocktails 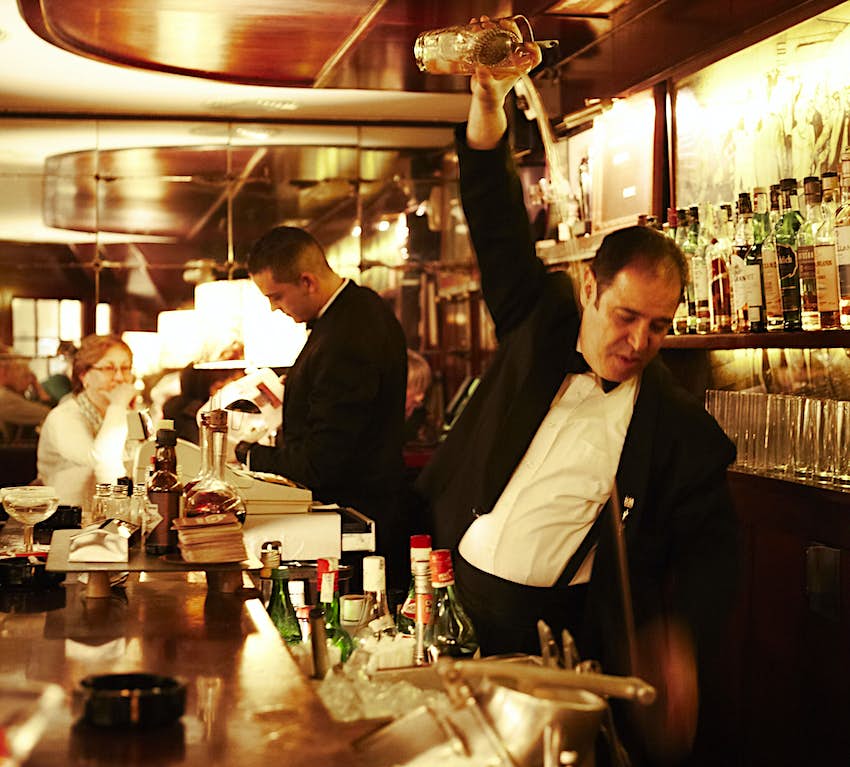 There’s hardly a shortage of bars in town, and on a warm summer’s night it’s difficult to resist the lure of the nearest free table and cold bottle. But resist it you should: chances are that one of Barcelona’s finest watering holes lies close at hand, hiding its neon light under a bushel.

Take Coctelería Boadas, hard up against La Rambla and right in the eye of the tourist storm, it’s dark, anonymous and overlooked. Barcelona’s first cocktail bar, it was opened in 1933 by Miguel Boadas, who’d learned his trade mixing up Hemingway’s daiquiris at El Floridita in Havana. The louche sophistication he cultivated survives: jaded roués and glamcouples, all having a stylish stiffener in a triangle of deco panelling, rich with the patina of rare old nights gone by. There’s no menu, each of the bar staff holding the recipe to 680 cocktails in his head. Boadas Coctelería is located at Carrer dels Tallers, 1.

The only way is up

Other than a few glass towers on the reclaimed docklands and a token Gherkin-esque downtown phallus, Barcelona remains a pleasingly low-rise city. In general, looking down on Barcelona means going up one of the peaks that girdle the city. The creaky attractions at the amusement park on Mount Tibidabo might seem underwhelming on paper, but even a modest Ferris wheel gets the pulse racing when it’s 110 years old and perched on top of a 500-metre-high cliff. The park is another legacy of that turn-of-the-century golden age and comes accessorised with a Gothicrocketship chapel, the Sagrat Cor, as well as a funicular railway that connects with the 'blue tram' into town.

Feast your eyes and fill your belly 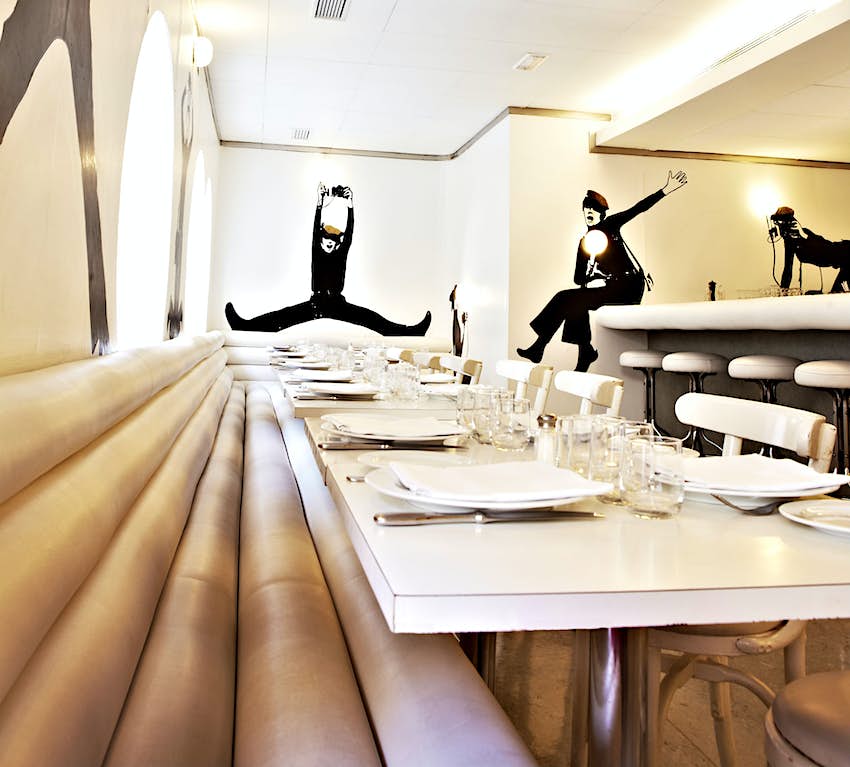 A city studded with a whole constellation of Michelin stars, Barcelona is also home to some delicious restaurant interiors. Being hidden away down a side street probably helped 1960s throwback Flash Flash survive intact through the decades when aloof minimalism dictated restaurant design, and resembling an orbiting tortilleria from Kubrick’s 2001 wasn’t a bankable look. Now its time has come again, with a new generation of native hipsters marvelling at the monochrome majesty of a restaurant unchanged since fashion photographer Leopoldo Pomés opened it in 1970 – that Catalan Twiggy strutting her stuff on the walls was his wife.

The staff – and most of the diners – are dressed in black-and-white in sympathy, and it’s probably no accident that by far the most popular of the 80 immaculately presented tortillas on the menu is the colour-coded morcilla de arroz de Burgos: black sausage and white rice. Flash Flash is located at Carrer de la Granada del Penedès, 25. 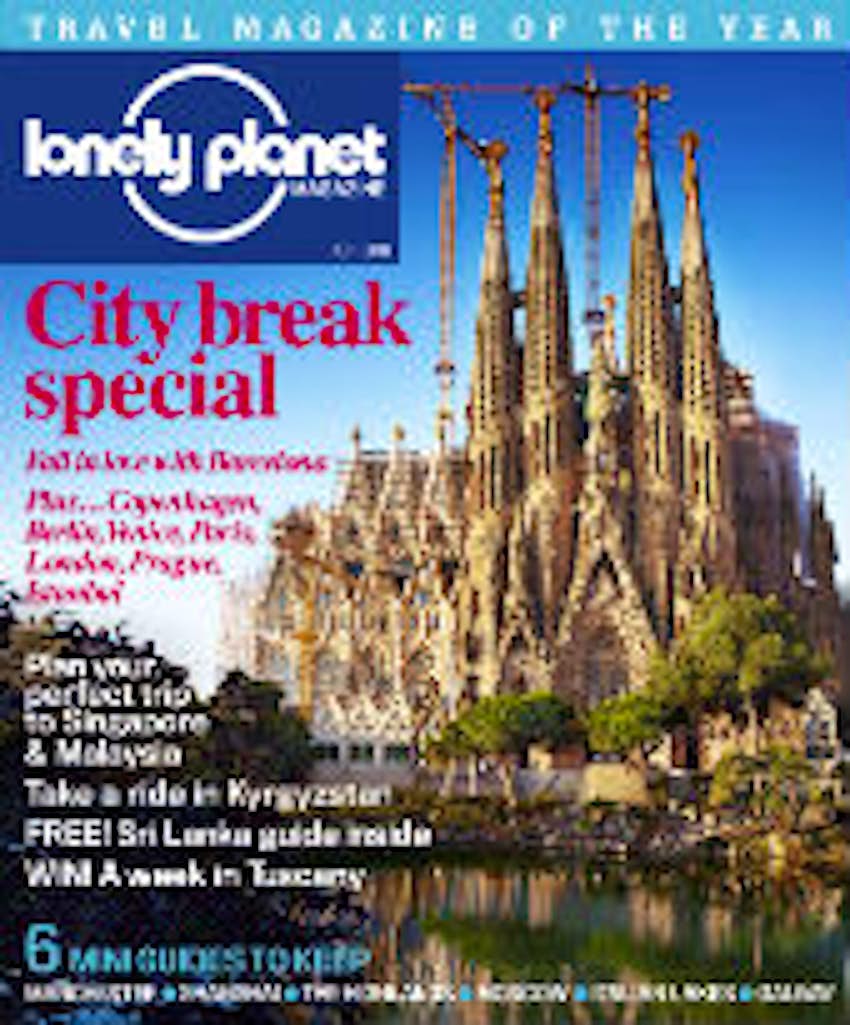 This article is reproduced from Lonely Planet Magazine, on sale now across the UK priced £3.70.

Beer, coffee, wine and spirits of the Pacific Northwest