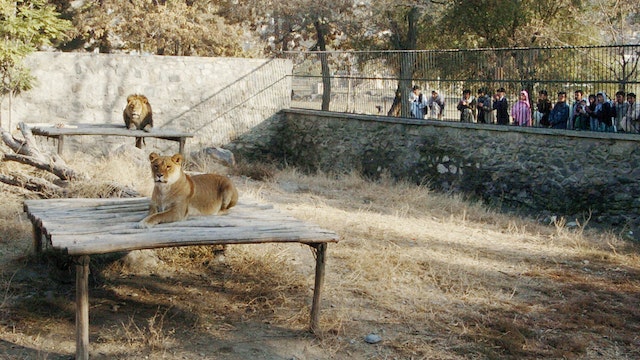 The zoo is a popular place for Kabulis in need of recreation. Western animal lovers might find it more than a little depressing. Visitors are greeted by a bronze statue of Marjan the lion, the zoo’s most celebrated animal. A present from West Germany in the 1960s, Marjan survived life on the frontline and a Taliban grenade attack, only to expire soon after Kabul’s 2001 liberation. He has since been replaced by a pair of lions presented by China. A couple of sloth bears can be seen in a pit, pacing like asylum inmates. Some wolves do the same nearby, next to a cage of grumpy-looking black vultures. Only the colony of macaques look happy with their surroundings, with the young diving pell-mell into their moat (this could be an illusion though – one effected an escape during our visit, and was rounded up by visitors using the time-honoured method of throwing chairs at it). The zoo sits on the Deh Mazang roundabout, in front of the newly rebuilt Traffic Police headquarters (until recently one of the most spectacularly smashed buildings in Kabul). The Minar-e Abdul Wakil Khan stands in the centre of the roundabout, erected for a Nuristani general who fought against Bacha Saqao’s rebellion in 1929.