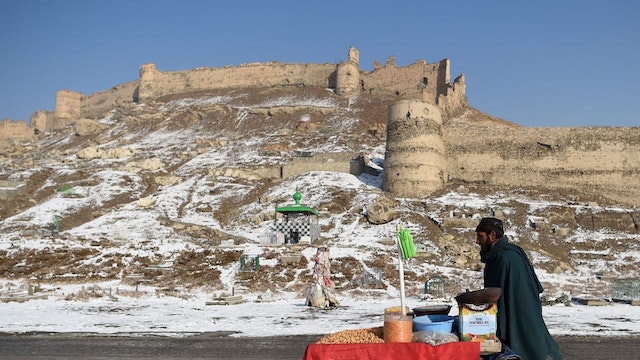 The old seat of royal power, a fortress has stood on the site of the Bala Hissar since the 5th century AD, and quite possibly before. It sits at the foot of the Koh-e Shir Darwaza mountains, guarding the southwestern approaches to Kabul.

The citadel as it stands today was built at the end of the 19th century. The previous fortress was destroyed by the vengeful British army at the end of the Second Anglo-Afghan War. Now, as then, it is used by the army and closed to visitors. However, the old city walls snake out from its towers along the mountain ridges and make a fantastic walk, raising you high above the dirty air of the city to give some breathtaking views of the capital.

The starting point is at the foot of the huge cemetery of Shohada-ye Salehin. Most approaches will take you past Jad-e Maiwand and the ruined Shor Bazaar, a traditional centre for Kabul's musicians, and the place where 'Bukhara' Burnes was killed by the mob in 1841. The road brings you along the southern foot of Bala Hissar, with good views up to its ramparts. Start the walk around 1km after the citadel.

There are two routes leading up the slopes to the ridge of the mountain. A longer path on a gentler gradient takes you to an obvious pass between two peaks. To the left was territory held by Hekmatyar during the civil war, with Massoud's men to the right. A better alternative is to keep to the right and head steeply uphill straight away. A 40-minute hike brings you to a high ridge from where you can look east to the Bala Hissar, and north to central Kabul - Shahr-e Nau Park, Jad-e Maiwand and the Pul-e Khishti Mosque are good monuments to take your bearings from. Boys quite often fly kites here. At this point you're already higher than Koh-e Asmai (TV Mountain) opposite.

Continue west along the ridge. Almost straight away you meet the old walls, several metres thick in places. Although the path is clear and well-beaten it's possible to find plenty of spent ammunition here, so resist the temptation to nose around any of the foxholes near the walls. As you slowly ascend the ridge curves north, revealing splendid views of west Kabul and Darulaman.

After a further half an hour of walking you'll near the end of the ridge and a final view - this time straight down to Babur's Gardens and Kabul Zoo. With views to all sides, this is the best spot in Kabul for understanding the city's geography, especially the narrow strategic gap where Koh-e Shir Darwaza and Koh-e Asmai almost meet - known as the Shir Darwaza (Lion's Gate) - with the Kabul Valley stretching far in either direction. Also look out for the platform of the Noon Gun, and follow the path downhill towards it.

The Noon Gun is actually two cannons dating from Abdur Rahman's reign. They were fired daily, and to mark the end of the Ramazan feast, but only the barrels now remain. From here, follow the paths though the local houses to emerge near Babur's Gardens.

The walk should take three or four hours in total. Take a sun hat and plenty of water. Although there aren't any red rocks designating mines, we'd still advise you to stick to the worn trail.