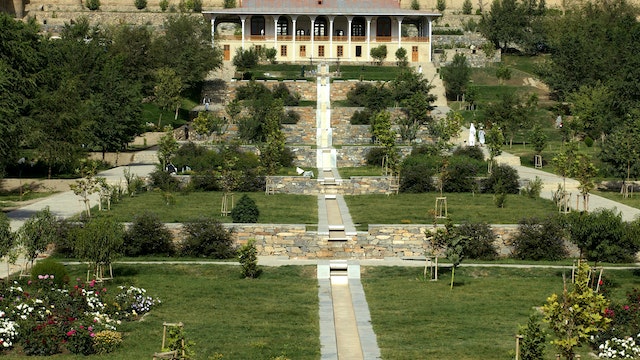 Laid out by the Mughal ruler Babur in the early 16th century, and the site of his tomb, these gardens are the loveliest spot in Kabul. At 11 hectares, they are also the largest public green space in the city. Left to ruins during the war, they have been spectacularly restored by the Aga Khan Trust for Culture (AKTC). The garden was laid out in the classical charbagh (four garden) pattern, with a series of quartered rising terraces split by a central watercourse. The garden was used as a pleasure spot by repeated Mughal rulers, but fell into disrepair after the dynasty lost control of Kabul. Abdur Rahman Khan restored much of the grounds at the turn of the 20th century. Public access was allowed in the 1930s, but the gardens were despoiled and many trees cut for firewood in the anarchy that swept through Kabul during the civil war. The garden is surrounded by high walls, rebuilt by the local community. Visitors are greeted by a large traditional caravanserai which is planned to open as a visitors centre, showing many of the finds excavated in the archaeological dig that preceded the restoration. Although modern, it stands on the footprint of an older building of the same plan built as a refuge for the poor in the 1640s. From the caravanserai the eye is immediately swept up the terraces, following the line of the white marble watercourse. On either side the grounds are deeply planted with herbaceous beds and saplings. Many species chosen for replanting are specifically mentioned in the Baburnama, including walnut, cherry, quince, mulberry and apricot trees. In the centre of the garden is a pavilion built by Abdur Rahman Khan, with a series of information boards on the restoration programme. Above this there’s a delicate white marble mosque built in 1647 by Shah Jahan, who commissioned the Taj Mahal. While on a much smaller scale, the similarities in style are evident in the clean carving of the stone. Overlooking the whole of the garden from the top terrace is Babur’s tomb, inside a simple enclosure. Babur wished to be buried under the open sky so his grave is uncovered, surrounded by a simple marble screen. The headstone says it was erected for ‘the light-garden of the God-forgiven angel king whose rest is in the garden of Heaven’. Given the near-miraculous resurrection of the grounds, it’s an easy poetic sentiment to agree with.