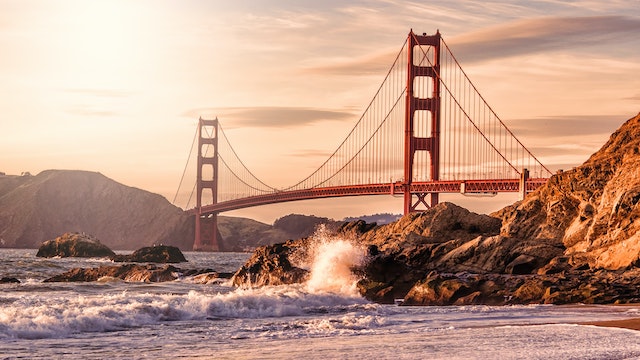 Few cities boast a structure so iconic as the Golden Gate Bridge, commemorated in everything from films like The Maltese Falcon to not one but two emojis. Still, it's become so much a part of San Francisco's fabric and the popular imagination that it's easy to forget what an uphill battle it was to even break ground on the bridge.

The decades long battle for the construction of the Golden Gate Bridge included nay-saying over logistical challenges presented by the depth of the bay, the hard winds that come in off the Pacific, and even protected sites like Fort Point. The project also had such fierce opponents as the Southern Pacific Railroad Company's ferry subsidiaries, the United States Navy, and even teamsters advocating for local labor, all who had a vested interest in prevent a bridge from ever crossing the San Francisco Bay.

Despite plenty of opposition, construction commenced early in 1933 and four years later the Golden Gate Bridge took its place amongst the foremost architectural wonders of the world. Still, San Franciscans have passionate perspectives on every subject, especially their signature landmark – though everyone agrees that it's a good thing that the Navy didn't get its way over the bridge's design.

Naval officials preferred a hulking concrete span, painted with caution-yellow stripes, over the soaring art-deco design of architects Gertrude and Irving Murrow and engineer Joseph B Strauss, which, luckily, won the day. The iconic International Orange hue, however, is a concession to the military's concerns over visibility – it's the same color used in the aerospace industry, shared by NASA's flight suits and a few other major structures including the 25 de Abril Bridge in Lisbon and Tokyo Tower in Japan.

Where to see the Golden Gate Bridge

As far as best views go, cinema buffs believe Hitchcock had it right: seen from below at Fort Point, the 1937 bridge induces a thrilling case of Vertigo. Fog aficionados prefer the north-end lookout at Marin’s Vista Point, to watch gusts billow through bridge cables like dry ice at a Kiss concert. Other popular places for bridge photographers include Baker Beach, Crissy Field, and Lands End.

You may notice while crossing or simply admiring the span from a nearby vantage point that the Golden Gate Bridge now "sings"  – noises that result from very recent retrofits designed to help the bridge withstand intense winds off the ocean. Locals have been less than thrilled about the humming, which has been compared to everything from sound effects common to director David Lynch's eerie ouvre to "a giant wheezing kazoo."

To see both sides of the Golden Gate debate, hike or bike the 1.7-mile span. Muni bus 28 runs to the parking lot, and pedestrians and cyclists can cross the bridge on protected sidewalks. For drivers, bridge tolls are billed electronically to your vehicle's license plate. Tolls are collected only when you are driving southbound into San Francisco. Toll fees are $7.70 for those with a FasTrak account, $8.40 for one time payments by license plate, or $8.70 for a toll invoice.

Bike, bus, boat and foot tours are available through various companies if you want to learn more about the bridge's history up close. Another popular option that kids love are San Francisco Fire Engine Tours in an open-air Big Red Shiny Mack Fire Engine, which not only crosses the Golden Gate Bridge, but also visits other popular sites like Fisherman's Wharf.