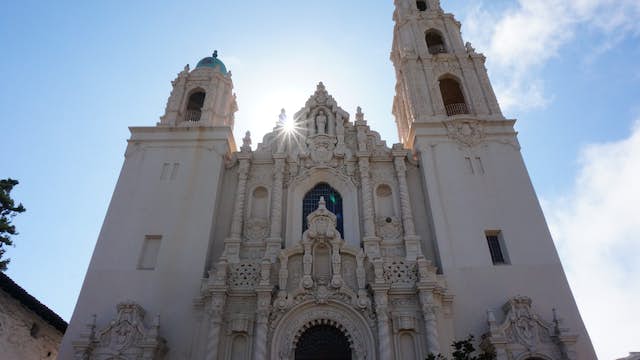 The city's oldest building and its namesake, whitewashed adobe Misión San Francisco de Asís was founded in 1776 and rebuilt from 1782. Today the modest adobe structure is overshadowed by the ornate adjoining 1913 basilica, built after the 1876 brick Gothic cathedral collapsed in the 1906 earthquake. It now features stained-glass windows depicting California's 21 missions and, true to Mission Dolores' name, seven panels depict the Seven Sorrows of Mary.

The basilica's doors are usually only open during services, so you'll need to pass through the original adobe structure and cross a courtyard to enter the basilica's side door.

The adobe structure's nickname, Mission Dolores (Mission of the Sorrows), was taken from a nearby lake – but it turned out to be tragically apt for native conscripts who were exposed to harsh living conditions and who had little resistance to introduced diseases. A graveyard memorial hut commemorates 5000 Ohlone and Miwok laborers who died in mission measles epidemics in the early 19th century, meanwhile their work survives them in the original adobe mission. The ceiling is patterned after native baskets, and recent restorations have revealed a hidden Ohlone mural behind the altar showing a sacred heart pierced by a sword and dripping with blood.

The mission graveyard is also the resting place of mission founders Don Luis Antonio Arguello, the first governor of Alta California under Mexican rule, and Don Francisco de Haro, the first mayor of San Francisco. Hitchcock fans looking for the grave of Carlotta Valdes will be disappointed: the tomb was only a prop for the film Vertigo.