in Golden Gate Park & the Avenues 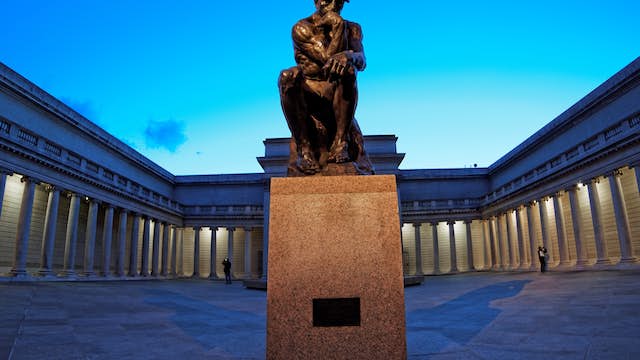 The Legion of Honor, or more formally known as the “California Palace of the Legion of Honor”, is a part of the Fine Arts Museums of San Francisco. It is home to a vast collection of works and artifacts that span 4000 years of art history, all set out in a beautiful building that overlooks the Golden Gate Bridge.

The Legion of Honor has welcomed visitors hailing from near and far for almost a century – it first opened in 1924, built to commemorate Californian soldiers who died in World War I. It was a gift of Alma de Bretteville Spreckels, wife of the sugar industry tycoon and thoroughbred racehorse owner and breeder, Adolph B. Spreckels.

From the outside, this majestic work of architecture is a beautiful example of neoclassical design. Sheltered by the towering Monterey Pines of Lincoln Park, the site offers dramatic views of the Pacific Ocean and the Golden Gate Bridge (perfect for photo ops!).

Inside, the Legion holds a vast collection of paintings (particularly works by European artists), photographs and sculptures that runs from ancient times to modern day.The Hall of Antiquities displays ancient works from Egypt, the Near East, Greece, and Rome, including sculptures, figurines, vessels, jewelry, and carved reliefs.

Be sure to check out The Spreckels Organ, a magnificent pipe organ built in 1924 by the Ernest M. Skinner Organ Company, of Boston, and presented to the Legion as a gift for its opening. The instrument is considered to be one of the finest organs in the world, with pipes ranging in size from half an inch to 32 feet. To hear the instrument in action, check the schedule for weekly performances.

There are also numerous works on display by master French sculptor Rodin, including a cast of what is arguably his most famous work, “The Thinker,” which dates back to 1880, and is a depiction an artist deep in thought (possibly the poet Dante, possibly Michelangelo). Today the sculpture has become a symbol for all poets and philosophers, pondering life’s big questions.

If you visit the gallery during November, be sure to see the Book of Gold. It is usually in the Fine Arts Museums’ archives for safekeeping but is shown annually at the Legion during the month of November to honor California veterans. Spreckels had military records scoured for the names and hometowns of those Californian military members who served and died in WWI. A calligrapher then inscribed the roughly 3600 names into this Book of Gold, which took a total of eight years to complete.

The museum itself is open Tuesday to Sunday and is closed most Mondays and holidays. General admission tickets start at $15 for adults and discounts are available for seniors and students. People aged 17 and under can enter for free.

General admission to the museum is free on the first Tuesday of every month – but note that this offer applies only to the permanent collection galleries. Visitors must still pay full-price for admission to the special exhibition. Visitors can check this calendar to see specific special hours and holidays. Those who want to delve deeper into the art on display can take a guided tour, offered in a range of languages.

You can take pictures within the museum, provided it’s with a handheld camera (no additional equipment allowed) and doesn’t disturb other visitors.

Visitors can also save money with the San Francisco CityPASS which includes admission to the Legion of Honor and offers 49% or more off unlimited cable car rides.

Spend the night at the Omni San Francisco Hotel, which is located in the heart of downtown San Francisco, right on the cable car line and just a short walk to Union Square. Tickets to the de Young and Legion of Honor are available for purchase at the concierge desk, and it’s an ideal location for visitors to indulge in some retail splurges after a day of educational art history, with Union Square known for its high-end shopping outlets, as well as its impressive art galleries.