in The Golden Horn 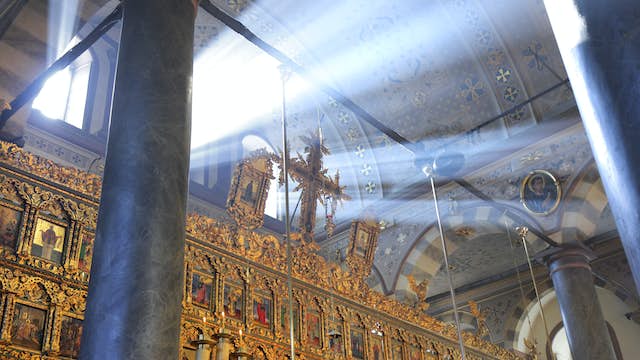 Dating from 1836, this church is part of the Greek Patriarchate compound. Inside the church are artefacts including Byzantine mosaics, religious relics and a wood-and-inlay patriarchal throne. The most eye-catching feature is an ornately carved wooden iconostasis (screen of icons) that was restored and lavishly gilded in 1994.

The patriarchal throne is in the middle of the nave. Made of walnut inlaid with ivory, mother-of-pearl and coloured wood, it is thought to date from the last years of Byzantium.

Other treasures include the 11th-century mosaic icon that is on the south wall to the right of the iconostasis. This shows the Virgin Mary holding and pointing to the Christ Child, and was originally created for the Byzantine church of Pammakaristos (now the Fethiye Museum).

Look for the Column of Christ's Flagellation in the southern corner of the nave. The church claims that this is a portion of the column to which Jesus Christ was bound and whipped by Roman soldiers before the Crucifixion. It was supposedly brought to Constantinople by St Helen, mother of the first Christian emperor, Constantine.

Note that the church is closed between 9.15am and 12.20pm for Sunday service when the Patriarch is in residence (usually once per month).